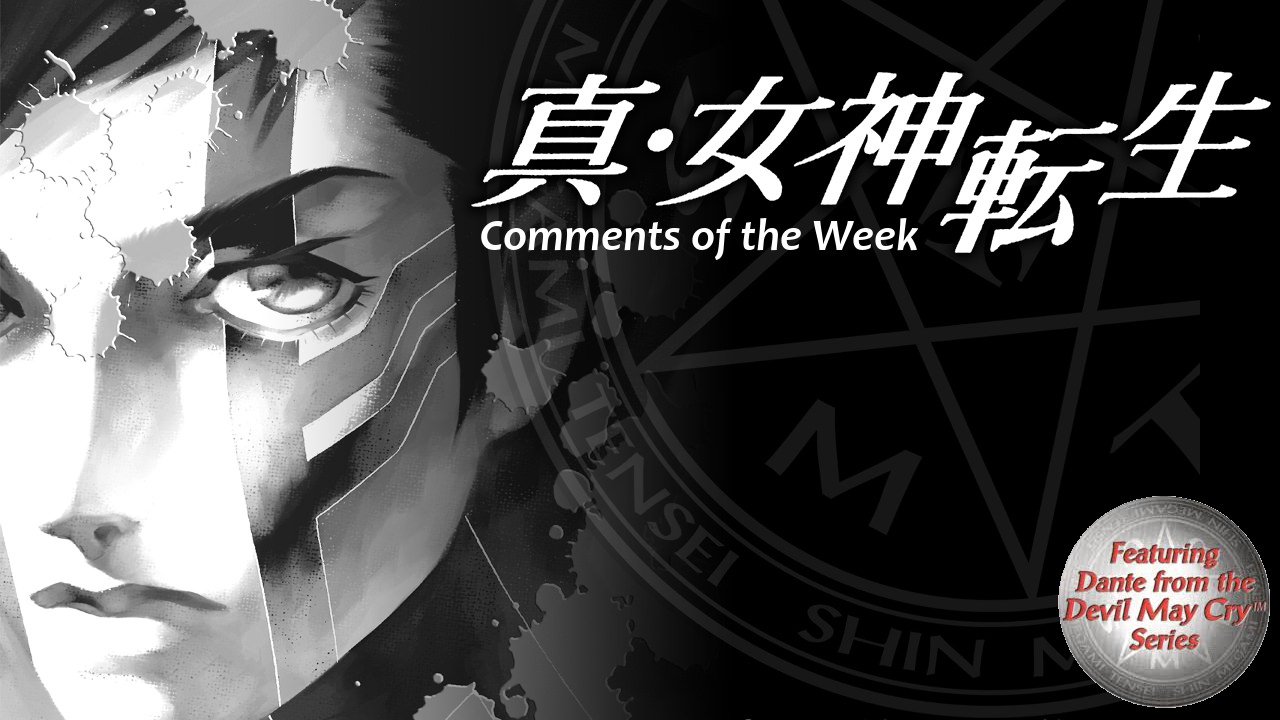 Hello my little demons! It is I, Plastic Tree up on Melancholy Hill! I have returned from my recent hiatus to bring you what you all love. My new theme is a reflection of my recent found fondness for Shin Megami Tensei: Lucifer’s Call. I was originally not a fan of the game, and preferred Digital Devil Saga‘s set up over Lucifer‘s more environmental-based storytelling. Bloodborne and Demon’s Souls started to change my perspective on that kind of game, and made me see Lucifer’s Call feat. Dante from the Devil May Cry™ Series in a new light!

Perro is out this week so the big tree is stepping in! His spirit is still with us through the delightful header and title cards he’s made for me.

Let’s get on with this!

FakePlasticTree: As of now it is on the defensive.

Hideki Kamiya has a lot of dream gigs, and one involves a Dante and Bayonetta crossover

FakePlasticTree: It is heavily implied that I’ve been doing the same.

FakePlasticTree: You get a free 10-minute trial.

FakePlasticTree: EA: Come on guys, it’s five bucks now! …does anybody want it for free? Would anyone like to be paid to play this game?

FakePlasticTree: Hype so intense he skips straight to his final form.

FakePlasticTree: EA: It’s not like we need lootboxes or anything…b-baka!

FakePlasticTree: There are always bigger fish out there.

The secret origin of ‘Hangry’ and other localization surprises

FakePlasticTree: That about sums up your average anime protagonist.

With Session, one studio aims to reinvent skateboarding games

FakePlasticTree: Fuck the man, I do whatever I want!

FakePlasticTree: I’ll fookin DRM your head in, I swear on me mum.

FakePlasticTree: Ted Cruz is every secret boss in any JRPG ever.

FakePlasticTree: My wallet is currently seeking counseling from Steam.

FakePlasticTree: It’s the season of giving…lots of money to Steam that is!

The Gwent single-player story campaign has been delayed

Jinx is launching a set of Overwatch hoodies this week

FakePlasticTree: Damnit you guys, you jinxed it!

FakePlasticTree: Truly an A-tier sniper not like a certain other sniper, who only hits 1 out of 10 shots, so dense that he absorbs every passing bullet flying his way.

FakePlasticTree: Sex anywhere, anytime, with anyone am I right?

FakePlasticTree: Robbing banks has never been this easy, to think all I had to do was simply walk into the bank, place a bucket on the floor and be like, “I’m going now, but if anybody wants to put some money in there then you know. The option is open!”

FakePlasticTree: My favorite part was when they used the Flashpoint crossover film adaptation as a way of saying, “Yeah we are throwing out all of the quality DC Animation into the trash as well.” Even Bruce Timm has disappointed me with his latest Harley flick.

FakePlasticTree: Even with a sequel on PS4 it is still criminally overlooked.

FakePlasticTree: Modesty is the trait of every good artist.

FakePlasticTree: There’s a first time for everything!

And that’s it for this week! Tune in next time for ooktar’s wild extravaganza, as he gets to kick off the first December-based COTW. We might be planning some holiday-themed things for that month too so look forward to that. Thank you dear Destructoid community for continuing in making this feature great. Cheers!