Boring is what I do best

Has it been five weeks already? I guess it’s time again for me to host everyone’s favorite part of Destructoid – Comments of the Week! I’ll try to make it as non-awkward as possible.

FakePlasticTree handled E3 week like a boss, and TheLimoMaker dealt with the post-E3 hype as only an Englishman can. Now I get to handle an even more exciting week with the SNES Classic Edition announcement!

Should you get Cave Story+ on Switch? Take this quiz and find out

Gmana: Yet Dere he is every week…

Gmana: Story+ of my life.

Gmana: For the Sims, there is no survival – only horror.

Gmana: The Sims 4: Locking Your Ex-Spouse in a Closet with No Doors and Setting Their House on Fire.

Gmana: Now they’ll have to live with knowing that although they may be matched with others, whether they wait ten seconds or ten hours, it will never compare to their first matchup.

Gmana: This is why everyone should just give up and leave all the Nintendo merchandise for me. 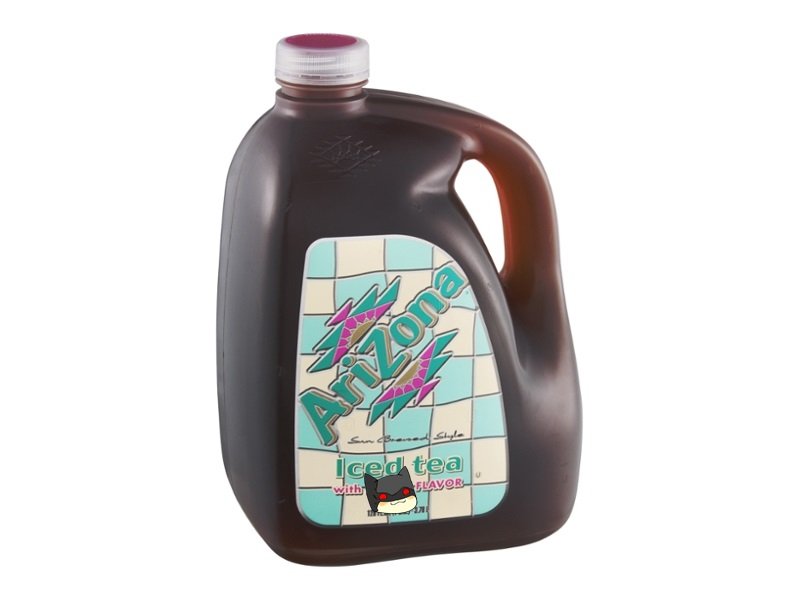 Snake Pass is getting discounts on Nintendo Switch and PC

Gmana: I have several questions. Do snakes use towels? Can towels speak? Is marriage between a snake and a human legal?

The legendary Pac-Man Vs. will be part of the Switch’s Namco Museum collection 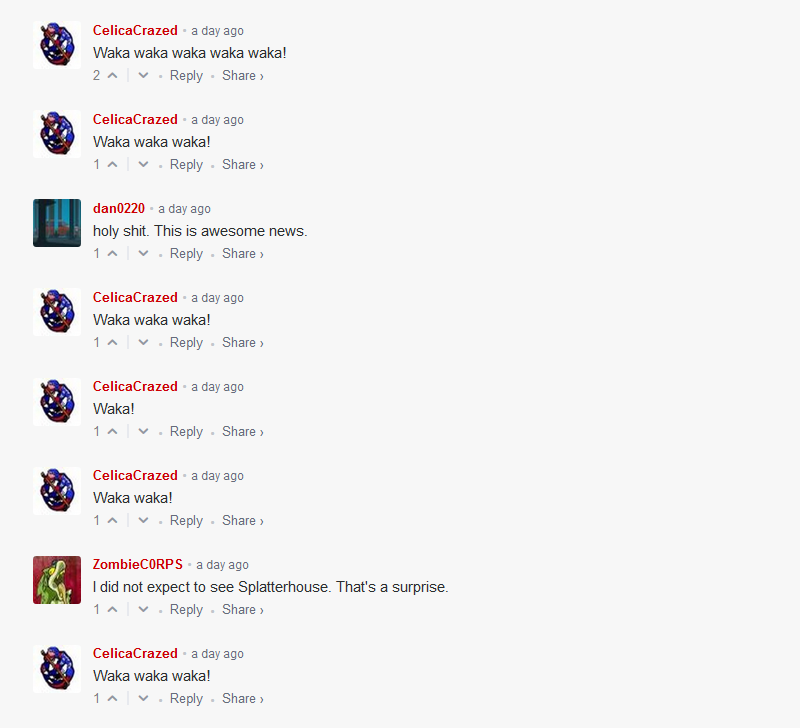 Gmana: Oh no, I’ve been doing everything wrong my entire life!

The End is Nigh looks right at home on the Switch

Gmana: I hope the End of puns is never Nigh.

Gorn is the perfect name for this ridiculous gladiator sim

Gmana: I’m Gorn to feature this.

Gmana: What? You think all Konami wants is money?

You can smell Dead or Alive Xtreme with Sense VR

Gmana: Scents that have followed me my entire life, so nothing new.

Gmana: I love Nintendo because they care enough to watch over us while we sleep.

Should you get GoNNER on Switch? Take this quiz and find out

Gmana: I scored 7,473 chicken nuggets. According to the score table, that means I should feature this!

Zelda: Breath of the Wild designer thought Tingle was ‘unsettling,’ yet adorable

Gmana: THANK YOU! Finally someone who understands me!

Gorn is the perfect name for this ridiculous gladiator sim

The legendary Pac-Man Vs. will be part of the Switch’s Namco Museum collection 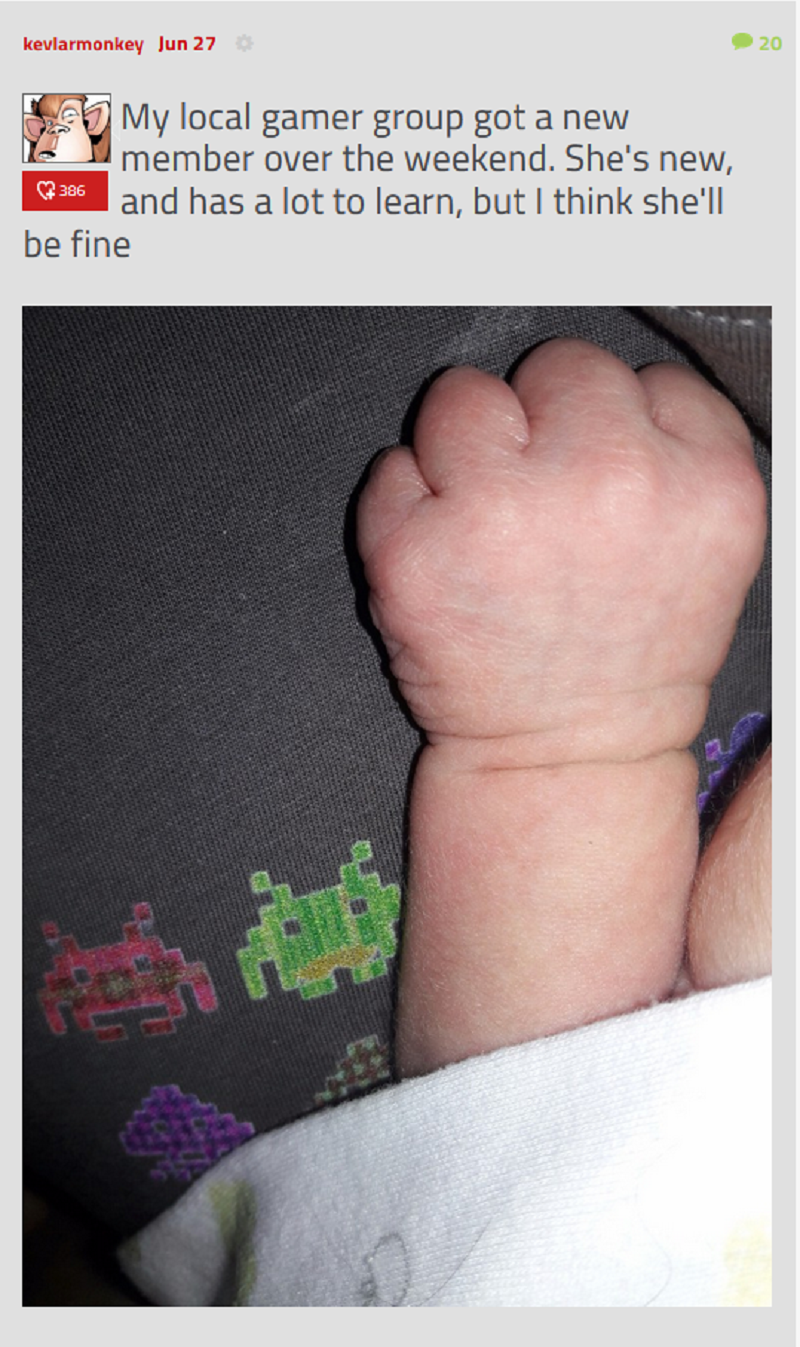 Gmana: And little kevlarchimp did git gud. She gat so gudder that she was able to single-handedly stop the Space Invaders during the War for the Planet of the Bulletproof Primates.

You’ll need two Switch consoles to get the most out of Pac-Man Vs. 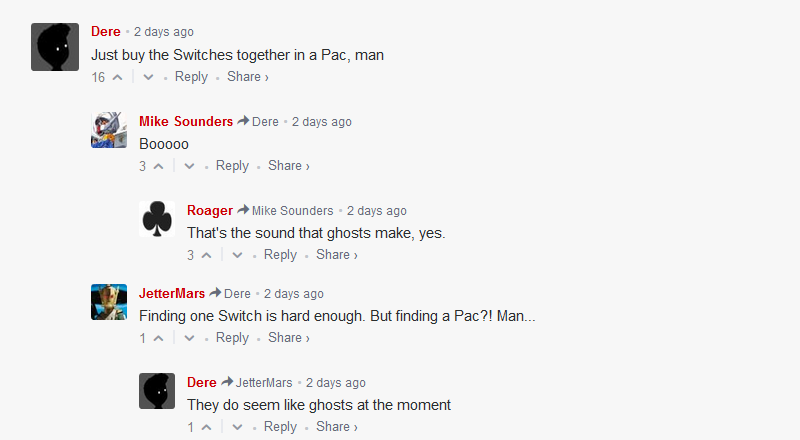 Gmana: It will be you Vs. a Pac of Men trying to get one whenever they get restocked.

That’s all for this week! If you all behave, I’ll come back in another five weeks to feature your best Nintendo comments! Everyone’s favorite gaming buddy, ZombZ, will return to cover next week!

Thanks to ZombZ for flavoring my iced tea!

Filed under... #comments of the week#Communitoid#Community#Community Highlights