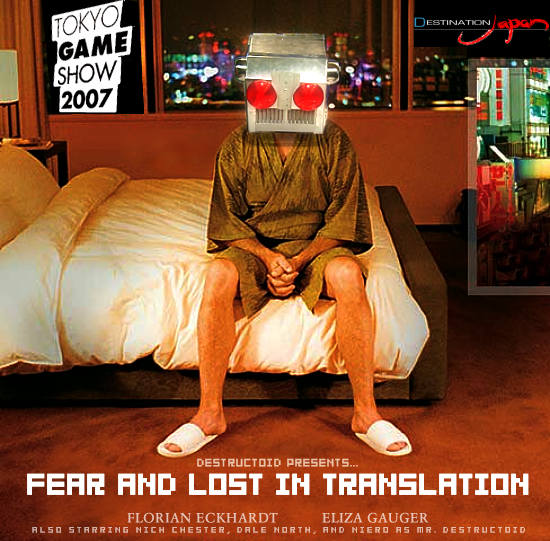 With a roar of the engine… with flame belching from the exhaust pipe… with the grill work glinting like the blood hungry smile of some Great Red Shark, a crimson Cadillac will explode through the walls of the Tokyo Game Show next Thursday, scattering in its wake a broken chaos of scoop-hungry journalists and polite, nervous-looking Japanese businessmen.

As the rear axle collides with the show floor, the bulging trunk of the Great Red Shark will burst open, sending the contents of what can only be described as a mobile police narcotics lab flying through the air like the evisceration of a pinata at a Mexican junkie’s birthday party. The contents? Two bags of grass, seventy five pellets of mescaline, five sheets of high-powered blotter acid, a salt shaker full of cocaine, and a whole galaxy of milti-colored uppers, downers, screamers, laughers and also a quart of tequila, a quart of rum, a case of Budweiser, a pint of raw ether and two dozen amyls.

And there, on the floor of TGS, to be discharged amongst the confetti of drugs, the writhing wounded, the shrieking metal and the flames? Two strange creatures looking like fresh arrivals from the planet of David Bowie, their eyes dancing with delirium. The first: a tiny blue-haired Replicant with purse-shaped lips and black android eyes. The second: a gay black albino with hair brighter than the sun.

Yes, next week, Destructoid’s TGS 2007 coverage will commence, and Eliza and I will be there as dedicated culture journalists. While the rest of the Dtoid team scramble for scoops, Eliza and I will be swooping through the conference like avatars of awesomeness, our sole concern to bring you the part of gaming conventions the other sites never bother with: the surrealist experience of actually being at TGS. We’re calling it Fear and Lost in Translation. Eliza wants to make sure I point out that the name was her idea.

We will, of course, not be alone. Nick Chester will be there, not just a savvy editor and a leader of men but also a modern-day Adonis, followed everywhere by a shrieking constabulary of schoolgirls. Dale North will also be in attendance: a deformed dwarf in a pair of blue velvet platform boots that he obstinately refuses to remove, resenting the loss of height even as his feet suppurate. Finally, imagine a massive pile of afterbirth of mayonnaise-like consistency, evacuated from the womb of a manatee, with an omphalos that smells like Joyce’s proverbial sunken **** of the earth and deep enough to contain several tiny, Swiss-made automobiles. Now shove this creature’s boneless skull into a cardboard robot helmet and you have our own Niero, Mr. Destructoid himself, as intimidating a presence at a gaming exposition as he is at a Black Angus buffet. This is our crackerjack team of gaming journalists.

Sponsoring our nightmarish spree through Tokyo and TGS? Hauling the dead bodies from our penthouse suites? Financially responsible for our property damage? Supplying us with the contents of our mobile police narcotics lab? Tasked with diplomatically resolving our international incidents? The good people at Destination Japan. And for every face we melt, for every succulent harajuku girl we harass, we will be sure to leave them with Destination Japan’s business card.

Listen to me well, Japan. Although you are well populated with effeminate gamers obsessed with Square-Enix’s moon-eyed hydrocephalics, you have never known a gamer like me. I am the nightmare demon of Jack Thompson’s amygdala. I am the icy evacuation of Lt. Col David Grossman’s bowels in the night. My mornings are spent hopped up on PCP and Cheetos dust, hydraulically bouncing around the streets in my hot-wired Broadway, cruising for hookers to fellate me. My nights are spent training on “The Grid” of my Murder Death Kill simulators. And my lunches? Tending my tomato patch in Harvest Moon with the killing field efficiency of the Khmer Rouge. I will be your Corinthian, my eyes full of razors, my mouth a psychotic grin, my tongue tasting of your fever dreams. And that goes double for Eliza.

Japan! Be our victim!

Stay tuned next week for our coverage. At the very least, watch in real time as the most disastrous business decision in Destructoid history unfolds. And finally, if you’re considering a trip to Tokyo, check out Destination Japan. They organize more than illegal drugs, diplomatic immunity and corpse clean-up services. They also arrange affordable, gamer-friendly tours with sexy bilingual guides that are just tops. Tell them Flor and Eliza sent you and get a pint of ether and a suspicious looking rag for free!

—
Florian Eckhardt has never done a product placement before and he’s a little bit nervous he might not have done it right, potentially cauterizing an arterial spray of lucre before it really started to spurt. Along with porcelain doll robot Eliza Gauger, he edits Ectoplasmosis, a fringe art and culture blog with an unhealthy fixation with Cthulhu and vagina dentatas.