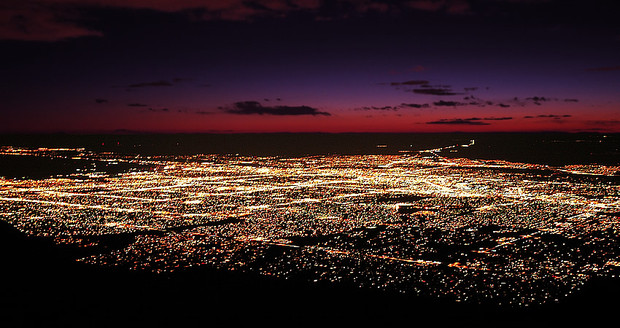 Some of you may already know this, but I hail from a place that is both Mexico and not Mexico at the same time: the newer of the Mexican lands, specifically, a town called Albuquerque. It is a place famous for hot air balloons, Bugs Bunny’s poor navigational choices, and…we named our minor league baseball team after an episode of The Simpsons.

The evidence is incontrovertible: Albuquerque, New Mexico is truly the greatest place on Earth.

But what’s this? A hidden layer of this great city that has long been forgotten? Indeed, what very few know about Albuquerque is that it has offered the single greatest contribution to the world of videogames. Without it, the industry’s landscape would be nothing more than a disfigured scarecrow standing in a field of crap.

So, come on your pilgrimage, all true believers in gaming, as we visit the one true gaming mecca and pay tribute to its incredible contributions to our lives.

Close your eyes and imagine a smoky sports bar/grill. Its patrons are screaming in unnecessarily loud voices at the many televisions, and only about 15% of them are drunk enough to justify the volume of their voices. Questionably attractive waitresses find questionable reasons to bend over, threatening to spill drinks and cleavage all over the restaurant.

Pool tables and basketball games fill one corner of the dining area, where children find refuge from the sports and breasts that they don’t care about. Some struggle to reach high enough to throw a football in a square hole on the quarterback game, while others search the billiards racks to find a cue short enough to wield effectively.

Yet this evil, twisted universe has a terrible omission. Nowhere in this stereotypical sports bar can be found Mad Dog McCree. Indeed, this terrible parallel land never saw the creation of American Laser Games. Gaming itself would die a short five days later, as gamers everywhere realized that they had nothing to live for.

Luckily, we live in the universe in which American Laser Games indeed existed. This glorious company was founded sometime in the late 1980s with the original plan to develop police training games to assist officers in firearm proficiency. One can only imagine that the company came to a startling realization: this technology was simply too awesome to be wasted on mere police. Thus, the company changed its name to American Laser Games and fulfilled its promise of being American, using lasers, and making games.

Its first gift from the heavens was entitled Mad Dog McCree, an old-west game that tasked the player with shooting dudes before dudes shot you. These weren’t just any dudes…they were real dudes. Real human beings that stood in the screen before you, giving you the stink eye as their hands hovered close to their six shooters. Real human beings that taunted your hypothetical bleeding corpse after murdering you with nothing more than a flash of light on the screen. Yes, this was FMV, and these FMV figures wanted you dead and weren’t afraid to tell you.

However, you weren’t helpless to avoid this fate. The cabinet came with its own weapon for you to take up at the proper moment. This was no Time Crisis; your gun remained in its holster until you were given the signal to draw, and only the quickest gunslingers would advance to the next poorly costumed human actor. At times, multiple people would overact on your screen simultaneously, launching themselves down into the dirt with the force of a kick from Monty Python’s foot.

It was, undoubtedly, the genesis of violent videogames, the hardcore gamer, the FPS, and method acting all at once. The magazine PC Gamer gave the game a 4% score, which means that only 4% of the games ever made in the history of the world are better than this one. What other game could have managed such a feat?

Why, of course there was a sequel! Mad Dog II: The Lost Gold was probably a game about gold that was lost by someone, but the pathetic cries of a story were drowned out by the pathetic screams of new overacted live-action deaths. Sure, many of the actors were blatantly the same ones from the previous entry, but their acting skills were taken to a much higher level. Bullets seemed to give actors wings, allowing them to soar and tumble in ways so realistic that even Hollywood felt immediately emasculated.

Later games from this amazing New Mexican company really stepped up the realism of both the shooting and the situations. Crime Patrol tasked the player with assuming the role of a police officer, telling a gripping, realistic story about a police officer who rises through the ranks by shooting a lot of people, including gangsters and terrorists. In fact, it is a documented fact that Kiefer Sutherland based the character of Jack Bauer upon the persona that he inhabited while playing through Crime Patrol. In Crime Patrol II: Drug Wars, the player also shoots criminals. This entry in the series was considered a revolution for the laserdisc genre, as it changed the scenery slightly from previous games.

Who Shot Johnny Rock? is notable for its inclusion of a question mark, which was a first for American Laser Games. This added a rich level of mystery to the barely present story, giving players the opportunity to say, “Hey, just who did shoot Johnny Rock?” as they continually shot or were shot by gangsters.

Yet we still have not arrived at the magnum opus of this incredible company: Space Pirates. There’s far more to this game than can be contained on one Internet, but one can get a good idea of the stunning quality of this game by viewing the cover of the game for the PC release. The strange space linebacker with the galaxy for an eye is only a brief taste of the incredible special effects employed by this game, which surpasses even Plan 9 from Outer Space in realism. The player again goes around and shoots people, but this time they sort of look like they might be from the future. The player also shoots things that sort of look like lasers, much in the same way that an avocado totally looks like a kiwifruit.

Despite the previous game taking place in the outer reaches of some sort of galaxy, you may be wondering, “Where’s the star power?” It was contained in spades within the incredible Gallagher’s Gallery. The brilliance of the title is overshadowed by the inclusion of the world’s greatest comedian and Oasis lead singer Leo Anthony Gallagher. Unless you have yet to have your humor hymen busted, you’ll recognize Gallagher’s name from his many “Sledge-O-Matic” acts, wherein he hits things with a very large wooden mallet for a few hours.

The premise of the game is that Gallagher has become too lazy to break things himself, so he instead asks you to shoot random stuff for no reason whatsoever. Shooting diet soda is one of the more tense moments of the game, as the diet soda sometimes changes location on the screen, and you must adjust your aim accordingly. Players often died from the stress alone.

So, as you can see, the lasting effect that American Laser Games, and Albuquerque by proxy, has had on the videogame industry is incalculable. Where would we be, as gamers, without laserdisc games?

Sadly, the brightest candle tends to get blown out the most quickly because it is too fucking bright and kind of a fire hazard. American Laser Games as a company ceased to be in the late 90s, shortly after abandoning the brilliance of laserdisc games and moving on to making games for girls under the moniker “Her Interactive.” Ooh yeah, I’ll moniker her interactive! Hiyoooo!. The company made a lot of Nancy Drew games, but since none of them contained Mad Dog McCree, nor were they made on laserdiscs, we will pretend that they never happened.

Thankfully, a company called Digital Leisure purchased the rights to all of the American Laser Games releases in 2000 in a deal that reportedly cost Digital Leisure either six billion dollars or a three-topping pizza from Papa John’s. Though the laserdisc is dead, the legacy of laserdisc games lives on.

So, let us all pay the proper tribute to the great city of Albuquerque, and the great company American Laser Games, with the following image:

And now, for your viewing pleasure, please enjoy the following compilation of gameplay videos from these incredible games. Required viewing.