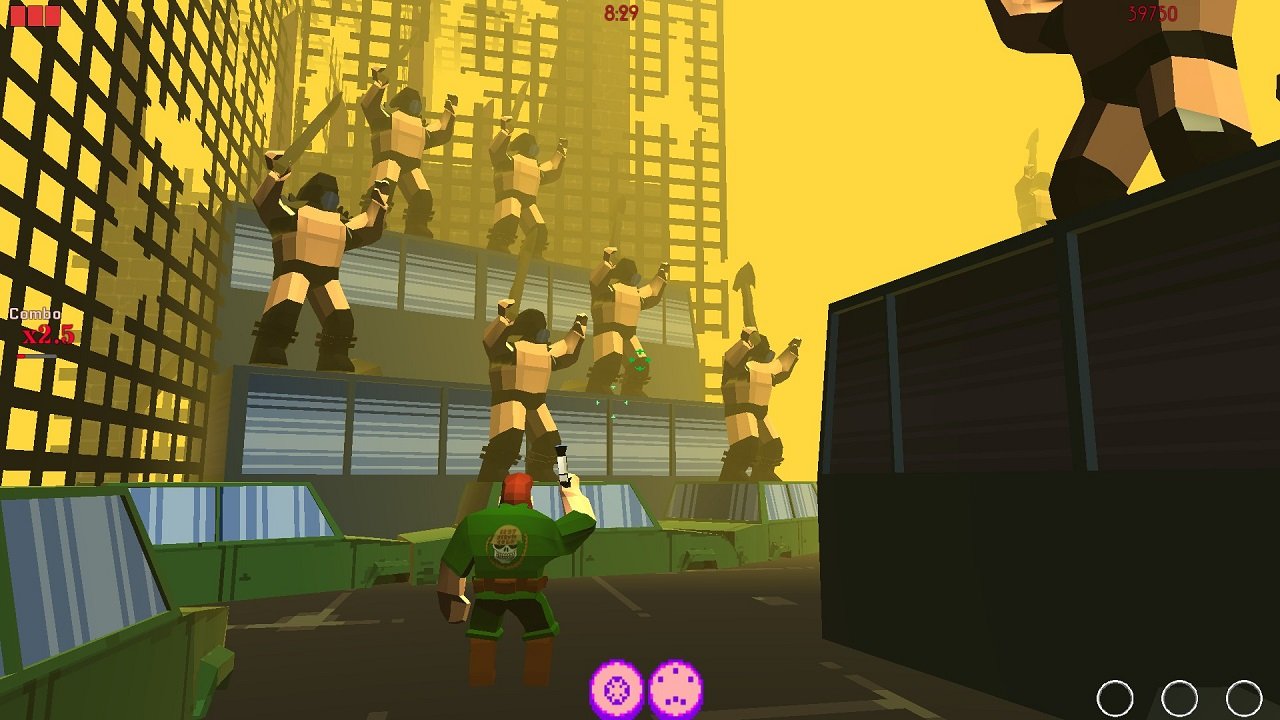 I rarely put a game down and immediately start writing about it. I prefer to let my experiences soak in a bit so that my hot takes can marinate into coherent thoughts.

Today is different, though because I’ve been binging on Cold Vengeance and it’s rad as hell. The 3D run ‘n’ gun shooter looks like a long lost N64 game, but it just came out yesterday. It’s clunky, all low-poly models and erratic camera angles, but utterly chaotic when it gets moving. In a way, it reminds me of every absurd action movie I’ve ever seen: You run, shoot, and kick everyone’s ass from the second the game starts. And from what I’ve played so far, the action never bothers to slow down.

The first few levels feel like an even campier take on Escape From L.A. As Jon Dagger – yeah, that’s the protagonist’s name – you fight through rundown city streets and battle robots, flying Canadian shock troopers, and dudes in leather bondage suits wielding shovels. It’s nutty, sure, but Cold Vengeance‘s over-the-top premise is a big part of what makes it work.

I mean, look at the game’s plot:

In the year 200X, the totalitarian National Hell Party rose to power in Canada. They declared martial law, formed an alliance with the mysterious Ninja Empire and kidnapped the President of the United States. They then bombed all major American cities. Afterward, they sent an army of soldiers and robots over the border to clean up the scraps.

You play as Sgt. Jon Dagger, a lone soldier who must travel through the ruins of America into the Great White North on a rescue mission to save the President. He’s joined by a former Soviet engineer who has uploaded himself into Sgt. Dagger’s brain.

In your mission, you must run and gun your way through a variety of environments, fighting post-apocalyptic barbarians, Canadian soldiers, fiendish robots, and powerful ninjas.

Like any other run ‘n’ gun shooter, progressing through Cold Vengeance boils down to shooting the ever-loving shit out of anything that crosses your path while always moving forward. But because it takes place in a 3D space, multiple, diverging paths can be taken through every stage. An alleyway that ends in a form means two remarkably different routes. Sometimes rubble can obscure a more direct, (mildly) safer path you might have missed if you made don’t bother to take in your surroundings. Collectible coins and numerous powerups litter each stage. Finding them – usually through a little bit of camera manipulation and light exploration – is always worth your time, because Jon Dagger needs every advantage he can get to stay alive.

Because of Cold Vengeance’s run ‘n’ gun roots, it’s rare for a minute to pass by without a hail of enemy fire coming your way. Surviving and completing each stage requires some finesse, as you do a janky little dance around 3D spaces, dodging pellets and bombs while trying to avoid taking damage and fire back. It takes a bit of getting used to, but after a level or two, Cold Vengeance’s twist on the run ‘n’ gun formula clicks, and Dagger becomes an unstoppable force of liberty.

Within the span of two hours, Cold Vengeance has provided me with a consistent challenge and a steady stream of goofy moments. Its less-than-serious, B-movie sense of style meshes quite well with the game’s blocky aesthetic. Dagger’s mission is far from over, but it’s one that I can’t wait to see through to the end.