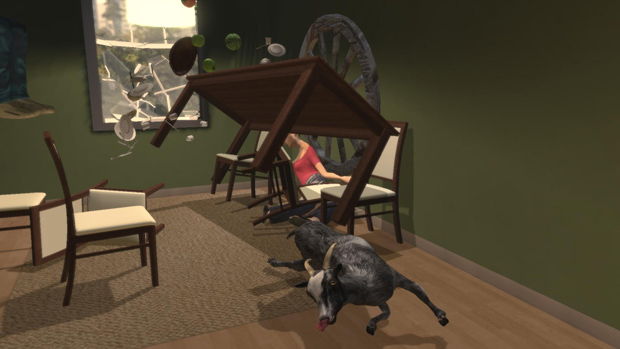 Sanctum developer Coffee Stain Studios has written about the birth of Goat Simulator, a hilarious thing that at one point wasn’t going to be a real game until enough of us demanded it. We needed this. “After a day or two we reached more views on the Goat Simulator video than we had in all our other trailers we’ve produced over the last few years, combined.”

The team held a game jam following its work on Sanctum 2 and the goat concept eventually started to gain traction internally amid more serious ideas. “Some day in January, goats were in the majority. We reached the point where the studio was like ‘OKAY FINE, LETS DO THE GOAT THING!.’ After that, things went extremely fast.”

As feature requests from fans started coming in, many of them extraordinary and beyond the project’s original scope, the studio “placed more people on Goat Simulator, made a real project plan for it (seriously, it didn’t have a project plan), and started looking at how we could add content and make the game worthy of all the hype.”

Now, the title will “have a gas station that explodes beautifully, a low-gravity testing facility, a waterpark, and a breakable stonehenge. We’re even adding AI for humans that will run away from you.” There’s also Steam Workshop support for mods, meaning “People are going to make levels filled with 10,000 explosive canisters, headbutt them with a goat, and make the game crash. And that will be glorious.” I know what I’ll be doing on April 1.

How Goat Simulator really did become our next IP [Gamasutra]