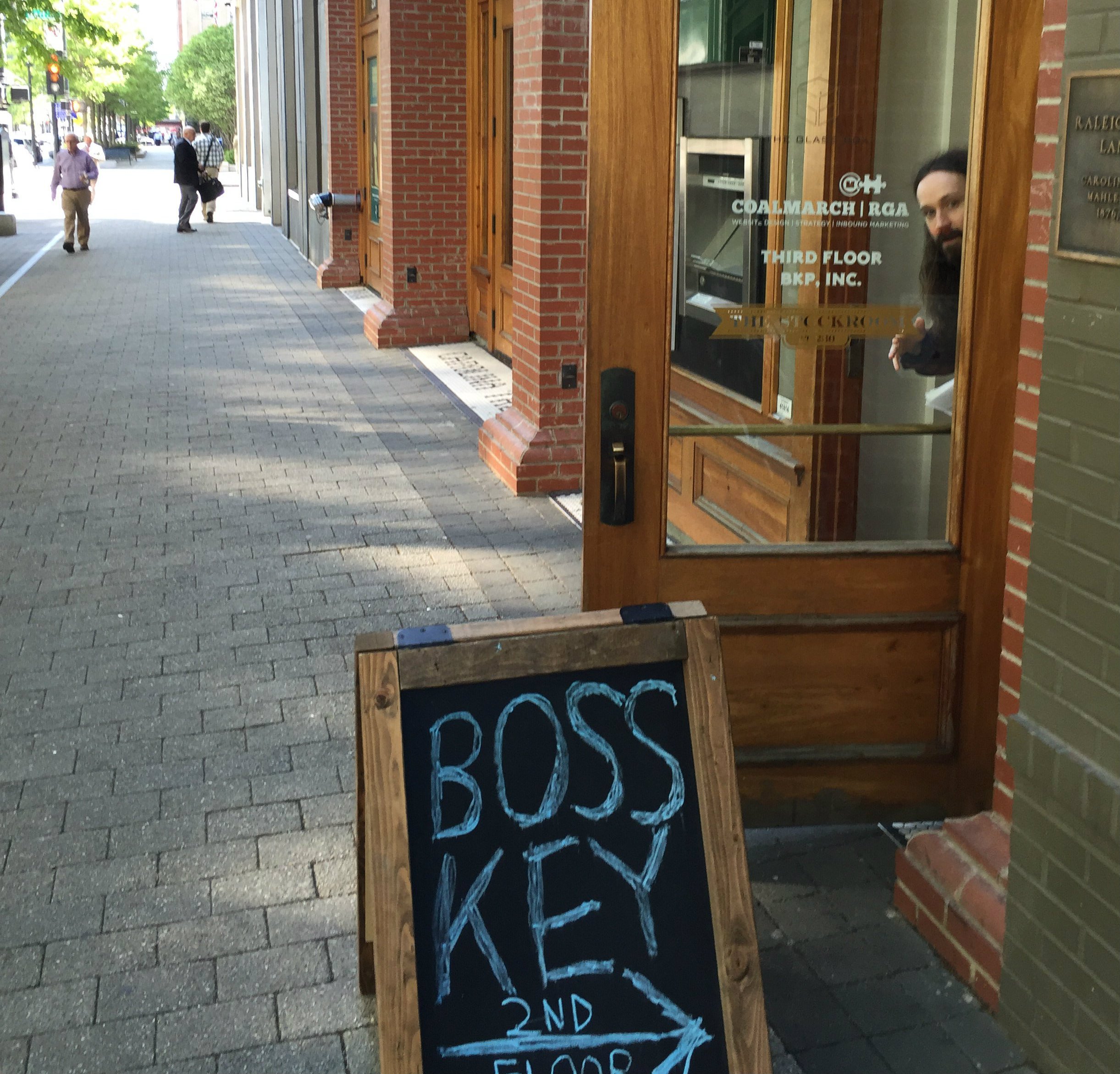 Our press bus sidles up to an unassuming office building in the heart of historic downtown Raleigh. Far from the bright lights and costly office spaces of LA or San Francisco, Boss Key Productions, Cliffy B’s new studio, is housed in a structure built in 1902. “2nd Floor, Boss Key” is written on a sign outside in chalk. Going in, my expectations for LawBreakers were fairly low.

I mean look, a game from Cliff Bleszinski, designer of shooters like Unreal Tournament and Gears of War, and Arjan Brussee, the co-founder of Guerilla Games, is bound to be decent at worst. But having actually played it, my interest is piqued — I’m just not so sure everyone else will have the same reaction.

We got a lot of hands-on time with the game, which is just as well because playing it is far more impressive than hearing about it. In his opening keynote, Cliff noted that he “doesn’t want to make a game skewed for a younger audience.” Whereas everything looked like “Disney or Pixar,” he wanted to make something with more of a “Tarantino sensibility.” And that’s fair, because there’s room for both.

The main gimmick is “gravity,” going along with the tagline “beat gravity into submission.” Due to clandestine experiments by the US government on the moon (you can see there’s a little bit of commentary here), an event called “The Shattering” severely damages the earth, creating pockets of gravity. Lots of really weird shit happens at that point, like the government selling off the Grand Canyon to the Yakuza for money, and so on. Cliff was quick to note that he “doesn’t miss campaigns…at least, for now.” Instead, they will be “seating lore,” as he calls it, with short biography tidbits and dialogue. It sounds pretty underwhelming on paper, but the gravity mechanic justifies its implementation.

One of the biggest differences between LawBreakers and its competition is the backfire key. By pressing control (by default), players can shoot their weapon behind them by way of blindfire. Seemingly a fleeting notion at first only in situational cases, it becomes supremely useful in special “low grav” pockets on the map. For instance, firing a rocket behind you (or two, or three) will propel the player in the air at an alarming speed. The tactic can be used right after capturing an object for a quick escape or to pursue an enemy. It feels real, real good.

Cliff was also quick to remind people that it’s not a MOBA, it merely has classes. Players can take up a number of roles (Enforcer, Vanguard, Assassin, Titan at the moment, with more planned), spanned across two sides (Law and Breaker). Each faction has its own unique characters, but the abilities are the same across both for balance purposes. You can probably see where this is going — like the Titan who is bulkier than most and has a slam attack, and the swift Assassin that has a grappling hook to get around.

But you know what? Since each character only has three main abilities (one is an ultimate), every single one of them manages to augment that playstyle’s personality, to a point where they don’t blend together. The same goes for the Overcharge mode, which we played on the map Grandview. Here, Cliff wanted to eschew the typical two-flag CTF setup “for something different.” Instead, there’s only one “battery,” which both sides fight over at the start, and return to their base. At that point it’ll start charging, and once it hits 100%, that team has 20 seconds to defend it from capture. The kicker is that the battery retains its charge, even at 100%, making for some insane comebacks.

Watch that full match above (we win!) where I play as the rocket-wielding Titan to see what I mean, and note my 100% battery steal from the opposing team 6:50 in. Almost everything about LawBreakers is catered to the hardcore crowd. The art team was very proud of the fact that with its current build, the game is running at 140 frames per second. PC fans will revel in the chance to run circles around players who typically use controllers with twitch movements and precision aiming. At the moment, there don’t seem to be any major concessions for new players — which is fine — but could end up being troublesome if they don’t hit the playerbase target they want come launch.

They clearly want casual fans to pick it up too to grow their userbase over time and pump out more updates. “We want to come in somewhere around the $20 to $40 mark, hopefully the former, with our pricepoint,” Bleszinski explains. “We want a range where it’s an impulse buy. People see a highlight on Twitch, reddit, wherever, and they want our game. That’s what we’re aiming for without the baggage of free-to-play.”

But even after watching a clip online, I’m not sure LawBreakers will be able to hold people in this crazy era where we have a wealth of shooters, including Cliff’s old creation, Gears of War. Watch a few of the crazier moments in my game above and judge for yourself — and feel free to sign up for the alpha.

[Chris Morris, who previously wrote for Destructoid, currently works at Boss Key Productions. I met Chris at the event but did not work at Destructoid with him. Transportation was offered by the publisher but was ultimately provided by the writer.]