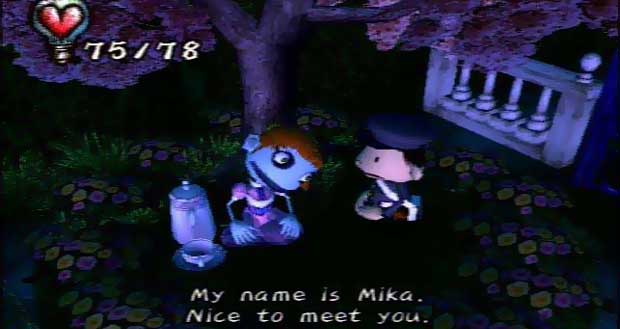 One of the things that I love about the Japanese school of game development is that it allows for retail based home console titles to be about anything. It’s similar to the difference between Manga and Western comics. In Japan, comics about football players, violinists, and homicidal hamburgers are sold right alongside the superhero stuff. In the US, you have to go to the “weird” part of the comic book store to track that kind of material down.

The same goes for Japanese games. Case in point — Chulip, the exploration game where you play as a young boy who is learning about kissing. The boy is so naive and innocent that he is apparently unaware that there are certain people (and things) that you shouldn’t kiss. Only through careful exploration of who he can and cannot get away with smooching (including cops, beasts, aliens, and zombies) will he be able to build up the moxie to give the girl of his dreams the ultimate snog.

The game flopped when it hit the PS2 ten years ago, but may see new life according to the ESRB. The game’s creator went on to play a part in Little King’s Story and No More Heroes, so fans of those games take note. If Chulip does well enough on PSN, maybe we’ll get a sequel! I want to make out with a kappa in full HD!