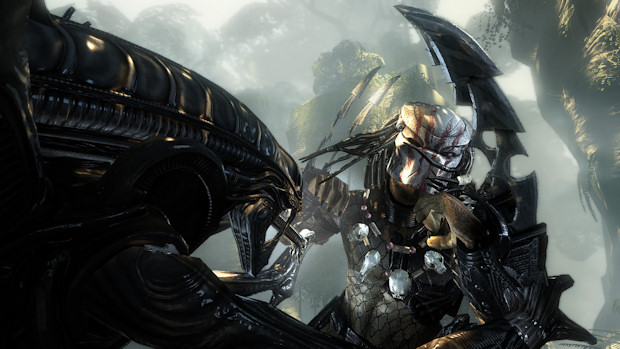 Rebellion has promised that we’ll be seeing Aliens vs. Predator multiplayer before the year is out, but there’s bad news for fans of class systems. Claiming that the “purity” of the game’s three species is more important, head of art Tim Jones doesn’t want to muddle things up with classes.

“Our multiplayer reveal will be happening later this year,” he states. “Suffice to say that you will able to play as all three species and there are some great game modes that make the most of each of their special abilities.

“We’ve looked very carefully at what has worked well and proven popular in previous games — and what has not — and we are focusing on making each species work as best as it can without complicating things further with class-systems. There is a beautiful purity to the three-species combat we have.”

I’d just asked Rebellion myself about classes, so I guess that’s buggered one of my interview questions for me. It’s a shame that classes won’t be on the cards, but if the combat is good enough, it shouldn’t matter too much. Once you start inventing your own Alien castes, you do tend to jump the shark, even if it does lead to awesome things like Kenner’s ludicrous Killer Crab Alien.