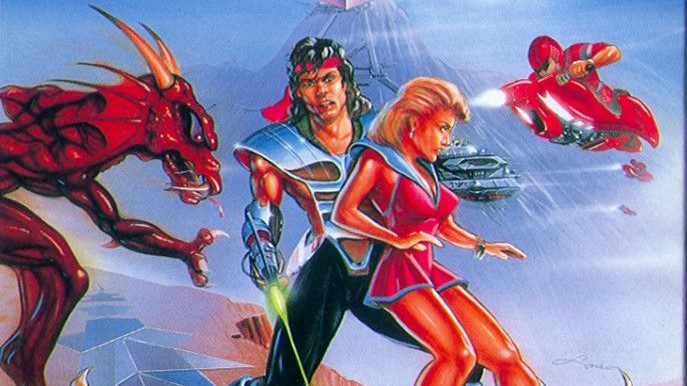 So that means I’ll need to take your power

If you’ve heard the name Clash at Demonhead before, it’s probably not actually because you saw a commercial for it or saw it in stores some far-flung day in the past. It’s because it was the name of the rival band in volumes two and three of the Scott Pilgrim comic series. This moniker was lifted from a 1989 NES game that didn’t get much attention.

I’m slightly obsessed with Clash at Demonhead because it is such a mystery to me. It plays like the third game in a series; the point where sales had reached such a point that it was time to begin experimenting and things got both intriguing and sloppy, like making love to an eclair. I feel like I should be telling you it goes by another name in Japan… is part of a larger series that we only got a few localizations of… or is based on a long-running manga. It has a different name, sure, (Dengeki: Big Bang) but there are no other games in its series. There is no predecessor that played it safe and introduced you to the cast. There’s no manga that makes sense of it.

There’s just Clash at Demonhead, and it just does its own thing. 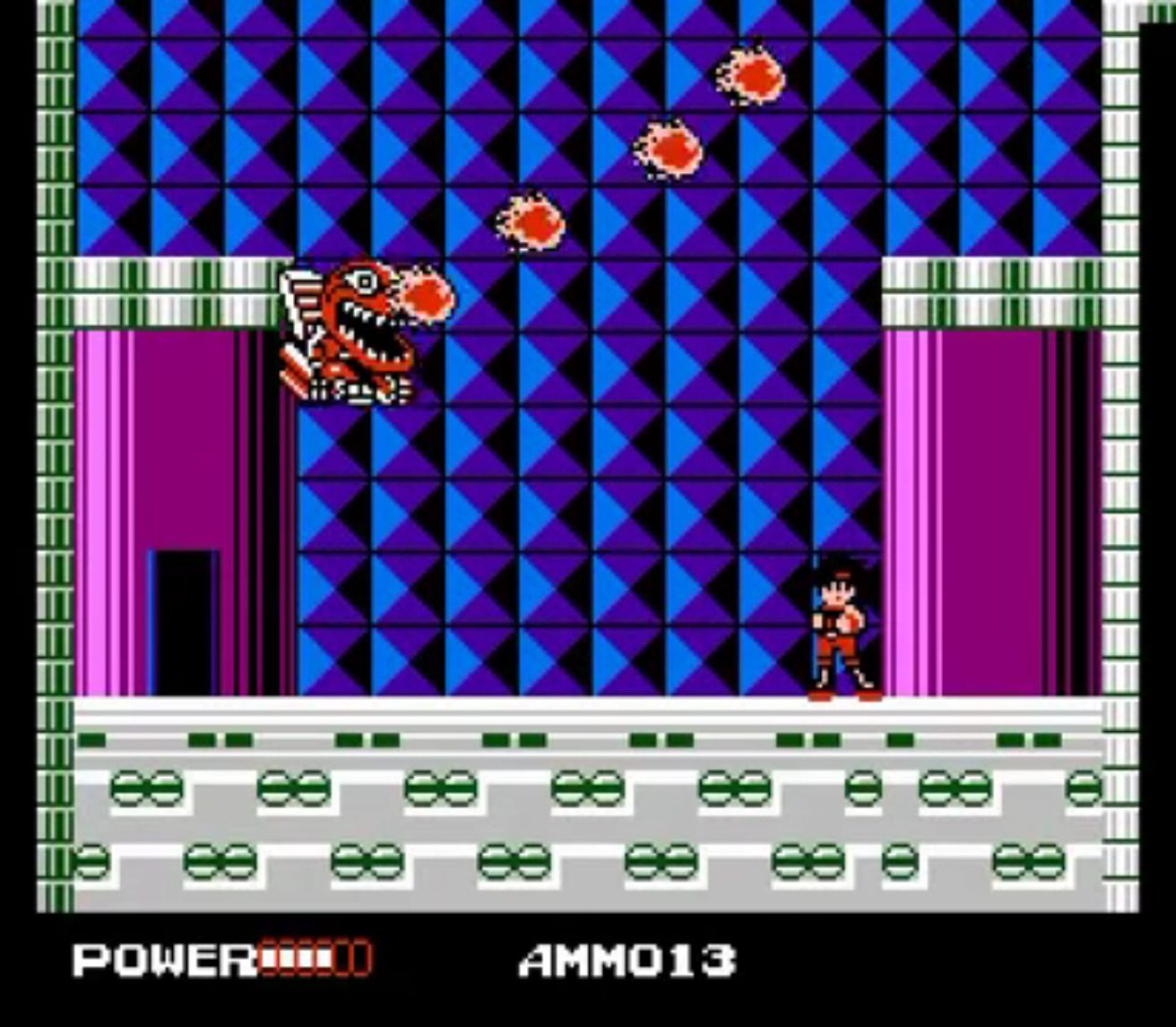 The mystery isn’t really Clash at Demonhead’s genre. It’s an action-platformer, through and through. What’s strange about it is that it doesn’t really follow any part of the platformer formula. A to jump, B to shoot; fire at anything that doesn’t look like you, no not that guy! That guy gives you advice. You’ll find NPCs occasionally, they don’t like being shot.

You’re also presented with a big map, but it’s not your typical node-style overworld map. It’s more like a road map, where you stop at an intersection and are given the choice of what direction to go. What direction should you go? Good question, but stumble into the wrong building and a boss will kick your butt.

The NPCs will help you. Go find the fairy on route 17. Which route is route 17? They’re not labelled on the map, so tough luck. Maybe start making a map of the map where you can mark down route numbers as you discovered them, as I did. What? You don’t have a notebook with maps of Goonies II and Metroid drawn in it? Where do you keep your passwords? 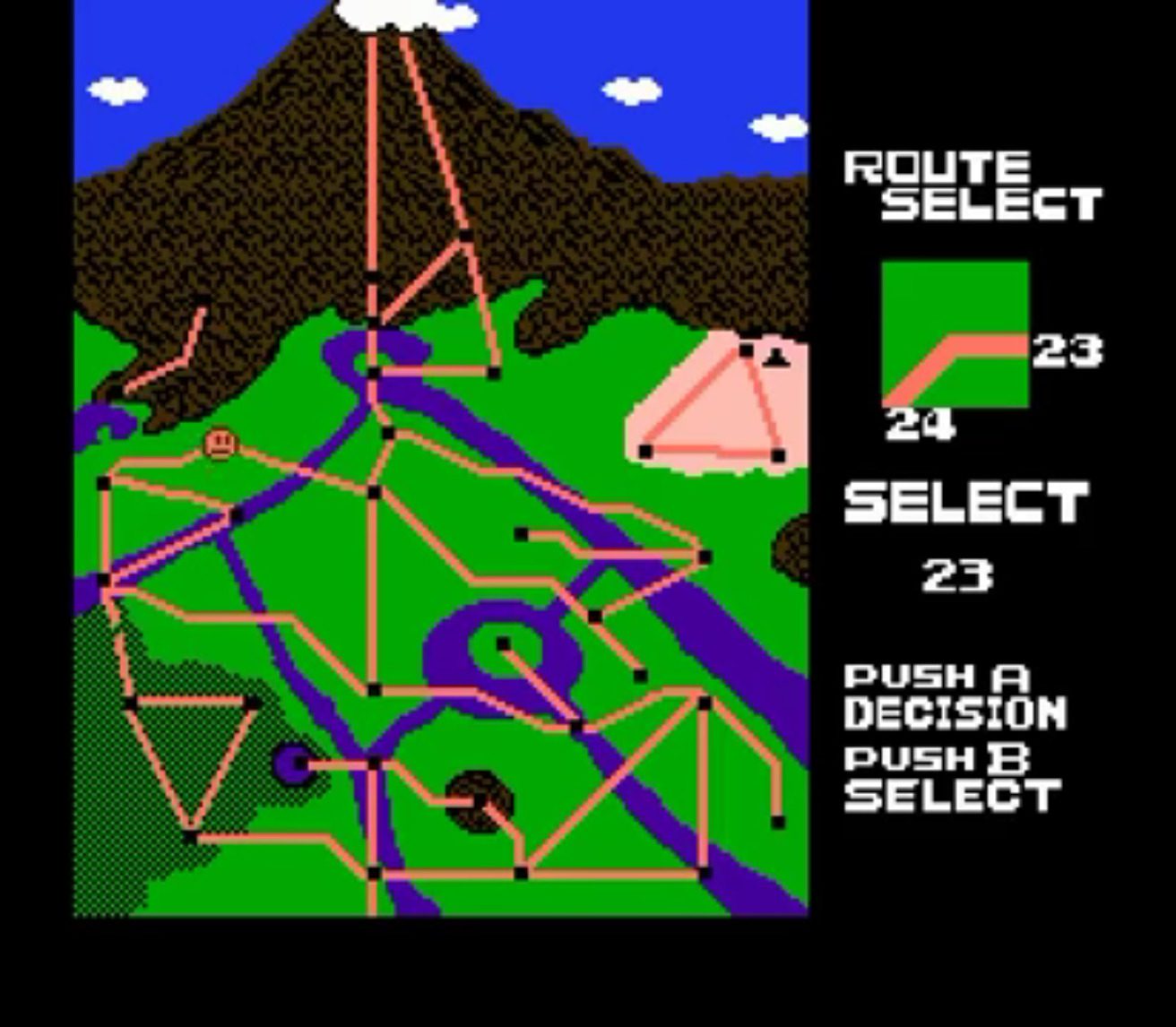 Clash at Demonhead is strange, but that doesn’t become apparent at a cursory glance. Once you’ve wandered the world for a bit it starts to set it. The levels are so loosely designed. There are dozens of enemy designs peppered around that all behave the same. There’s a store to buy supplies, but make sure you always buy the “shop call” before you leave, or you’ll have to trek back to the only spot on the map where it appears without one.

It has a bizarre expectation in that you already know Clash at Demonhead’s characters, even though they’ve never appeared elsewhere. You get notes from them that just get dropped into the levels that tell you to go to various places on the map because so-and-so needs help or what’s-her-face has been kidnapped. It’s an interesting dash of spice that gives the feeling that Clash at Demonhead is part of a larger plot. Except it isn’t.

The goal is to just defeat all the bosses on the map and recover their medallions. Apparently, these will defuse the bomb that’s threatening all of existence. It’s not the sort of narrative that necessarily needs secondary characters or a non-linear map to explore, but having them gives Clash at Demonhead its peculiar flavor, and it absolutely lives off of that flavor. 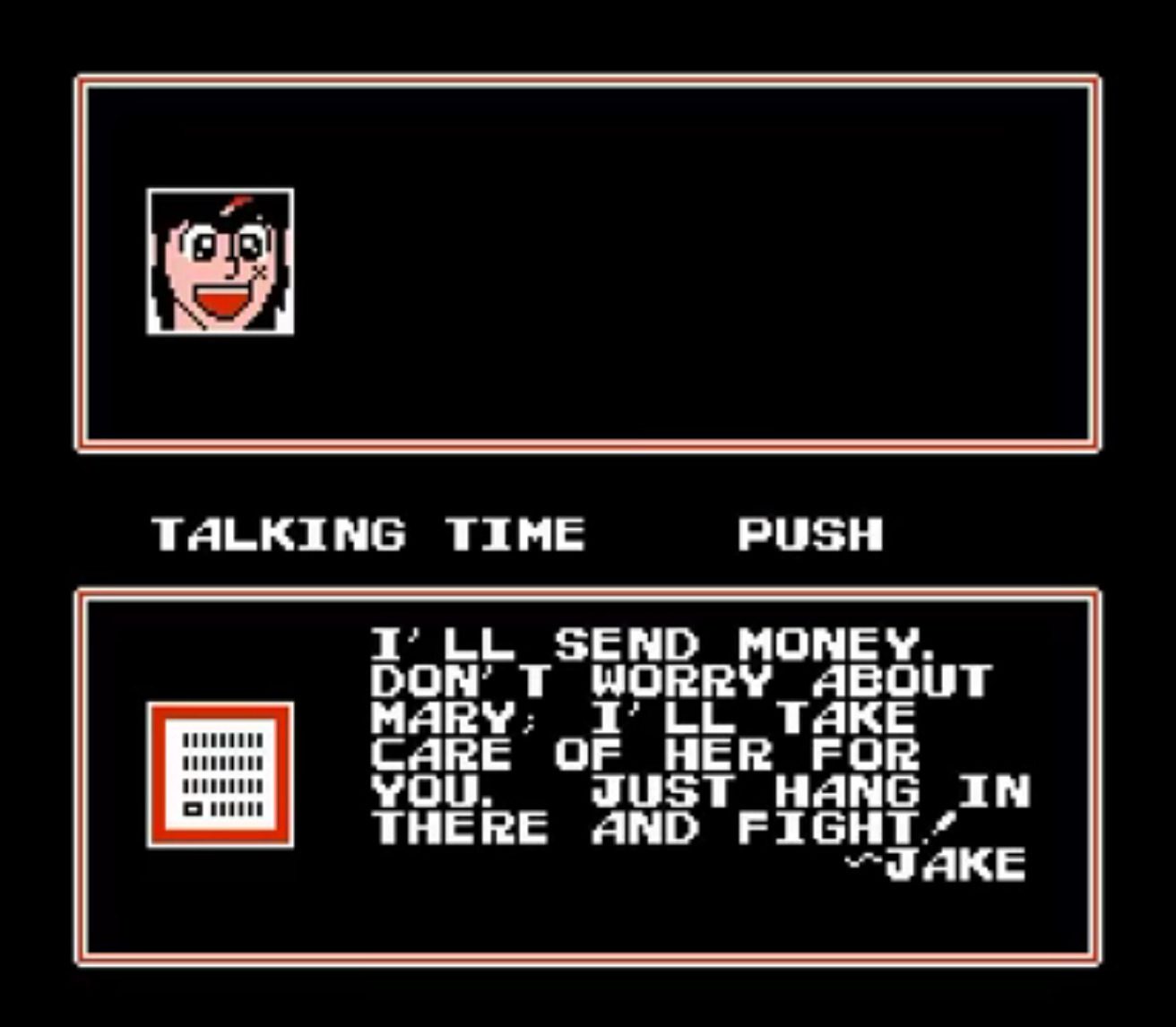 The level design isn’t very good. To cover such a large area, very little has been given much attention. Sections seem to repeat themselves and other parts of the map are more or less flat. There’s little danger to anything because the levels are so short, you can swim, so water isn’t a threat, and falling down a pit just makes you start the level over.

It’s a rather easy-going game. Unlike titles like Metal Gear and Metroid where you’re required to gain certain items before you’re allowed to access segments of the world, you’re really allowed to do what you want in Clash at Demonhead. You could take on the first boss you see, but maybe you’ll want to pad your wallet first, or perhaps load up on powers. It’s pretty non-linear in a strict sense. There are places where you can’t immediately travel, but they’re few and far between.

It’s also not very cryptic, which is a welcome change from its contemporaries in the genre. Important areas are either in obvious spots or you’re given specific hints through NPCs or notes. There’s still the possibility that you’ll get stuck running in circles because you overlooked something, but as long as you keep the hints you’re given in mind, it should be minimal. 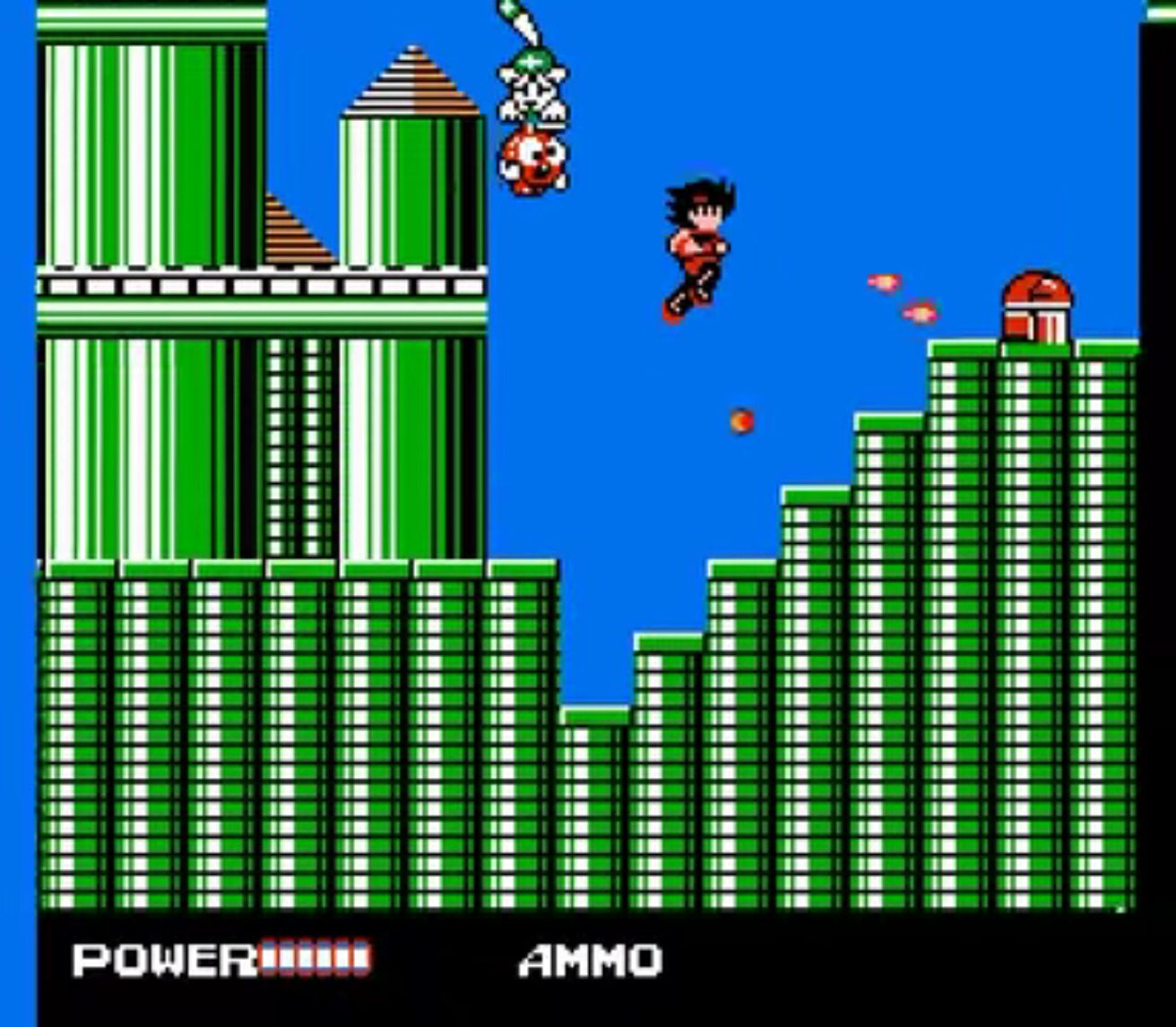 Clash at Demonhead largely succeeds due to its unique formula. It feels like it was made by someone who had seen a video game before but didn’t know anything about how they were made. A bunch of stuff got thrown at a wall and, through some miracle, enough of it stuck to make a coherent mural. Some of it is less vivid than other parts, but you’ve probably never seen anything like it.

What I mean is: the gameplay is pretty weak. The music is infectious but mediocre. While the character graphics are solid, the environments aren’t that pretty. If you removed the exploration, and the shop, and the NPCs, and just made Clash at Demonhead a linear action platformer, it wouldn’t be anything special. Not terrible, but not worth slotting into your NES.

But those things are in there and they go a long way to make Clash at Demonhead bizarrely compelling. You can play Zelda 2 and The Battle of Olympus, and they’ll give you the interconnected action-platformer experience, but they seem so normal next to the off-kilter Clash at Demonhead. I’m a sucker for weirdness, and you certainly get a lot of that here.

Unfortunately, we never saw a sequel, which wasn’t unusual for a Vic Tokai game. We didn’t get a Psycho Fox 2 or Decap Attacks Again. Then by the mid-’90s, the company seemed to transition out of video games entirely. Someone give me an HD remake by Lizardcube!