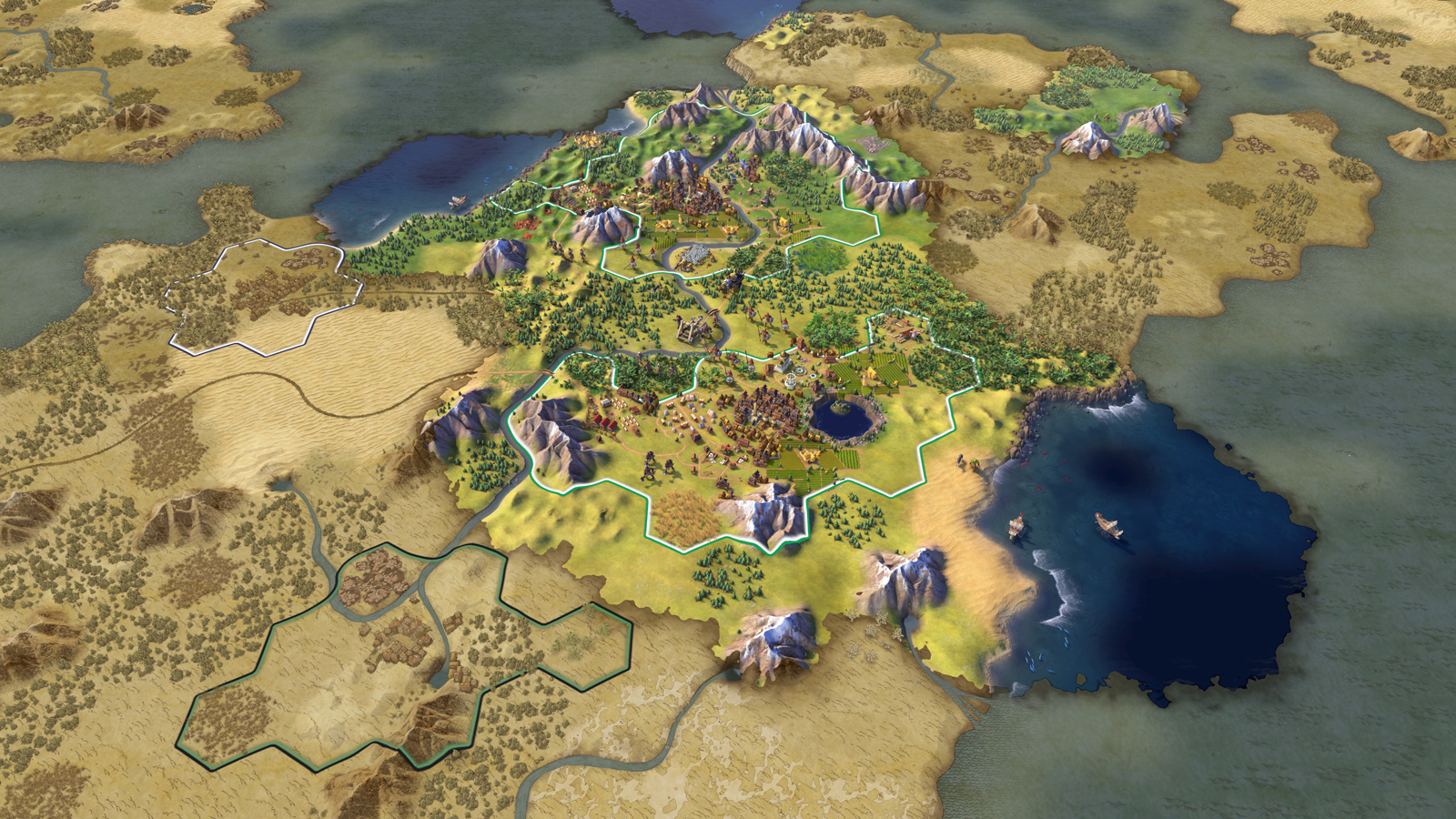 Watch out for mightier AI militaries

As a novice-at-best Civilization player, I tend not to get these games at launch. I know I’ll enjoy them, but the discounts will eventually come and so too will updates and expansions. I’m usually not in a rush!

With Civilization VI, though, I caved. I caved hard. But I don’t regret that decision. The base game has been a treat so far and if this is only the starting point, I’m hopeful for where an eventual “game of the year” edition might end up. Today is just one small step toward reaching that point.

Firaxis has an update out now on Steam that adds two maps, the “Cavalry and Cannonades” scenario in which units have lower maintenance costs and no strategic resource requirement, DirectX 12 support, and the usual balancing, tuning, and refining you’d expect to see.

There’s a lot of user interface work in particular, like more shortcuts to the ever-helpful Civilopedia and a clearer depiction of where your cities are sourcing their amenities. That pleases me.

[GAMEPLAY UPDATES]
• Added additional notifications.
• Added a “time defeat” for running out of time. This is always disabled if a Score Victory is available.
• Added additional Hotkey support (next unit, next city).
• Added the ability to rename cities.
• Added UI to show the next tile a city will grow to.
• Added a visual cue for Barbarian Scouts that are alerted to your city.
• Changed Dan Quayle rankings.

[BALANCE CHANGES]
• Added prerequisite project (Manhattan Project) for Operation Ivy.
• Added Metal Casting as a prerequisite for Economics tech.
• Adjusted religious pressure when a religion is first founded to give them more resilience and convert the city.
• Adjusted relationship decay rates.
• Reduced the effectiveness of cavalry production policies.
• Reduced Warmonger penalties in most instances, and adjusted how this reacts to returning versus keeping a city. The last city conquered from a player now provides a heavy warmonger penalty, even if you have a Casus Belli against this player, because you are wiping out a civilization.
• Reduced border incursion warnings if the troops are within their own borders.
• Increased the number of Great Works of Writing slots in the Amphitheater to 2.
• Increased Counterspy operation time.
• Increased the cost of Religious units and applied additional charges.
• Units may no longer be deleted when they are damaged.
• Deleting a unit no longer provides gold.
• Updated Island Plates map to have more hills and mountains.
• Units may no longer remove features from tiles that are not owned by that player.
• Fallout now prevents resource harvesting.
• Barbarian camps must spawn further away from low-difficulty players’ cities.

[BUG FIXES]
• Fixed some production Social Policies, Great People, and Pantheon bonuses that were not applying correctly.
• Fixed Royal Navy Dockyard not getting the right adjacency bonuses.
• Fixed some issues with how the Great Wall was built by players and AI, including proper connection to mountains and removing other players’ Great Walls as potential connection points.
• Fixed a unit cycling error with formations.
• Fixed a bug where the first military levy that expired would return all levied units (including those levied from other city-states) to that city-state. Now it should only return the levied units that actually originally belonged to the one city-state.
• Fixed several issues when Airstrips and Aerodromes are occupied, including forced rebasing of enemy units and UI updates.
• Fixed an exploit that allowed ranged and bombard units to gain experience when attacking a district with 0 hit points.
• Fixed an issue with wonders when transferring city ownership – conquering a city with a wonder would not track that wonder, and could lead to problems when attempting to use Gustave Eiffel.
• Fixed an issue where the Settler lens would not always show the right information to the player.
• Fixed an issue where AI would counter gold changes with the change desired, rather than the total amount of gold desired.
• Fixed an issue where the Tutorial intro and outro videos would appear off-center in certain resolutions.
• Fixed some crashes with units.
• Fixed an issue where multiple leaders of the same civilization would frequently show up in a game.
• Fixed an issue where Trade Route yields were doubling in some instances.
• Units in formations now break formation before teleporting between cities.
• The achievement ‘For Queen and Country’ was unlocking too frequently.
• AI with neutral relationships should accept delegations barring exceptional circumstances.
• Can no longer declare a Joint War if it is invalid for either party.
• Save game files should no longer be case sensitive.
• Certain wonders were sending extra notifications.
• Players will no longer receive any warmongering penalties from a joint war partner for actions in that joint war.
• Liberating a civilization back to life will now bring them back into the game properly.
• Observation Balloon range bonus was being incorrectly applied when stacked.
• Text and grammar fixes.

[VISUALS]
• Buildings on snow will now have snow on them.
• Added an Industrial Barbarian Encampment.
• Added a ranger tower to National Parks.
• Fixed some issues with buildings not culling around other world items properly.
• Fixed an issue with some Districts not showing properly.
• Miscellaneous polish applied to multiple improvements, districts, and buildings.

[MULTIPLAYER]
• Turn timers are always disabled on the first turn of a new game. This happens regardless of the advanced start or turn timer type selected.
• Allow multiplayer lobby’s private game status to be toggled once the lobby has been created.
• Cap the max players to 12.
• Added LAN player name option to options screen.

[UI]
• Added the number of specialists working a tile.
• Added some additional icons for espionage, promotions, etc.
• Added additional Civilopedia shortcuts, including right clicking a unit portrait.
• Added the signature to the diplomacy action view/deal view so that we can differentiate between duplicate players. Also added multiplayer screenname in diplomacy.
• Added Trade Route yields to the Reports screen.
• Added City Center to the City Breakdown panel.
• Added rewards and consequences to mission completed popups.
• Updated the leader-chooser when beginning a new game.
• Updated the end game Victory screen.
• Updated the multiplayer staging room.
• Updated city banners.
• Updated Espionage mission chooser flow.
• Updated to display what cities are getting amenities from each resource.
• Changed resource icon backings to reflect the type of resource it is.
• Auto-scroll to the first Great Person that can be claimed.
• Improved search functionality in the Civilopedia.
• Removed Barbarian data from player replay graphs.
• ESC now closes the Tech, Civic, and Eureka popups.
• When loading a game, the era blurb will be the current era of the saved game, rather than the starting era of the game.

[AUDIO]
• Added some missing mouseover sounds.
• Fixed the Oracle quote.
• Fixed an issue where the Advisor voice was not playing in some languages.
• Fixed compatibility issues with some sound cards, especially those set to high playback rates.