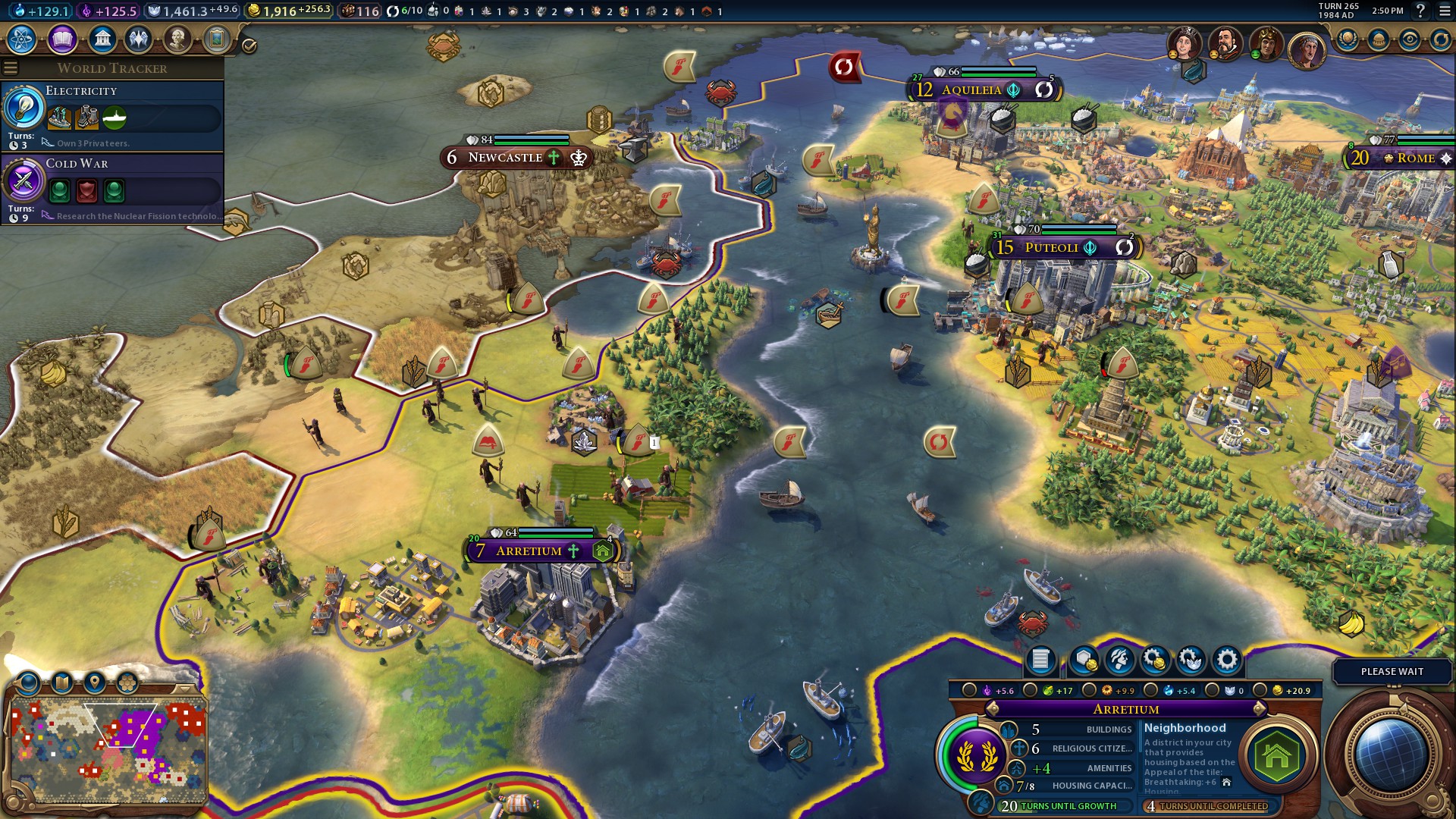 Sitting down to write this preview was a challenge. That isn’t because I can’t describe Civilization VI or I don’t like the game; it has to do with the nature of turn-based strategy titles. They become so addicting that you almost can’t turn away. Damn that “one more turn” prompt!

While not every change is positive, Civilization VI makes for a marked improvement over V and may even replace IV as my personal favorite of the series.

I’ve played roughly 22 hours of the Civilization VI preview build and I can safely say that I want to play more. There are big changes to how cities get placed on the world and it makes for an incredibly deep strategy title. You no longer build cities and automate improvements with workers.

Districts are what these tiles are called and they all require an individual space. If you place a city on an island with no surrounding land mass, you’ve basically set that city up for failure. Without any viable ground nearby, it won’t amount to anything.

This means you now have to be conscious of what you want each city to do. You can waste the time in trying to make every district for each city, but it’s going to leave you with no army, no money, or no research.

Any one specific district isn’t favored over another, though making room for entertainment is a must. The global happiness rating that was in previous games is now gone; everything is managed on a city level. If you aren’t providing amenities to your cities, they will eventually become angry and revolt.

This also affects housing, which is something you need to consider. Since you have to make room for neighborhood tiles in the later game, you can’t surround your city with wonders or districts and expect to be fine. Eventually, your city is going to expand and you’ll need to place citizens somewhere.

This then leads into the worker units. In previous titles, you could build a few of them, set them to automate, and reap the benefits. It was important, but it always felt a little tacky. It was almost a cheap way to ensure your cities were perfect without having to micromanage specific improvements.

Now, worker units are limited to three builds and must be manually moved around the map. Since districts, wonders, and neighborhoods require a whole tile, you have to carefully send workers to different areas to construct improvements. Sometimes, a farm you plotted near your city will need to be destroyed to make room for Broadway.

You can, thankfully, still send workers out onto water tiles (provided you have researched the required technology), so food isn’t as precious a resource as luxury items. Then again, there are also new tiles that house artifacts dedicated to improving the culture of your city; removing those could be disastrous if your army or science production beings to wane.

I tend to play a longer game in Civilization, so I instinctively neglect army building in favor of tackling wonders and other happiness-related improvements. Getting a culture victory was what I settled on, especially after I realized how easy it was when you properly plot districts.

If you build, say, a holy site near a natural wonder, you get a bonus in terms of acquired faith. This also extends to culture districts, which tend to produce more culture if they are adjacent to each other. Barracks will create units with more XP if you place them near your city, and so on.

This all adds up to a game that has a tremendous amount of stuff to learn, thus making Civilization VI less accessible than previous iterations. I didn’t find anything particularly difficult to understand, but you aren’t going to simply fly by on luck.

The best change, overall, has to be the HUD. While Civilization V made strides in providing a true widescreen interface, it still had a bunch of limitations. I was never a fan of needing to click into a sub-menu to automate exploration or how the victory conditions were hidden away behind a bunch of text. Now, everything is easy to find and explained quite well.

As I said, I went for a culture victory and it was easy to see which civilizations were in the lead or how many points they had towards a particular victory condition. If you don’t want to know the specifics, you can even just take a quick glance at the leaderboard and watch as your nation’s icon fills up.

Even if the new mechanics for city expansion have increased the learning curve, the actual menu shouldn’t leave you scratching your head. These changes combine to make a game that feels like a nice improvement over the previous installment, something that all sequels should.

I can’t say it has everything that Civilization V and both its expansions had, but VI definitely includes most of the content while making marked improvements to how the game functions. It also retains the hexagon tile system from V, so combat is still just as engaging.

I’m eager to get some hands-on time with the final build, as this preview doesn’t include a lot of options for customization. There are no scenarios or different difficulty options. Along with that, I wonder why multiple leaders for each civilization haven’t been carried over from IV. I suppose that isn’t a huge issue, but it does seem strange.

All the effort Firaxis put into making V a must-own will more than likely come to VI. I know Steam Workshop should be a given and we’re bound to get expansions that add tons of excellent content. DLC is already in the works (as nasty as that may be), so the content stream won’t be drying up anytime soon.

While I won’t give a verdict on the game just yet, it definitely is a worthy successor to the Civilization name. It is far more of a classic Civ game than Beyond Earth was, that is for certain.