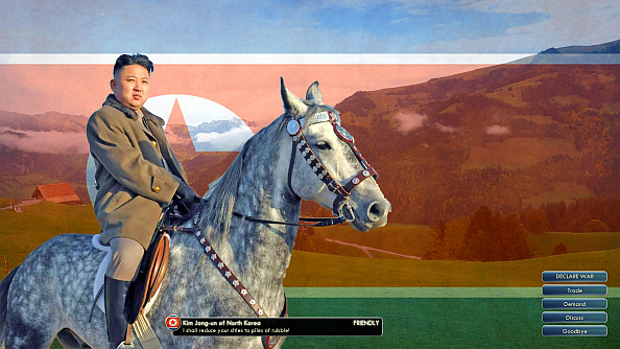 Civilization V has no dearth of interesting mods, whether you want to play as Mass Effect races, explore a map of Hyrule, or even indulge your inner brony, the modders have you covered. But what if you want to conquer the world as North Korea’s glorious dictator? Well, you can do that now, too.

Spotted by PCGamesN, there’s now a mod that lets players lead North Korea to glory or disaster, with Kim Jong-Un commanding the civilization from on top of a horse. It’s not a half-baked addition, either, as North Korea comes with its own unique units, buildings, and a special ability: Nuclear Bully, which doubles the nation’s uranium resources.

With North Korea cranking up the posturing to 11 recently, now is as good a time as any to test the country out in Civilization V. Did I mention Kim’s riding a horse? It’s worth mentioning twice.