Yep, that is Civilization all right

The Civilization series is famous for playing out in unplanned marathon sessions, where “one more turn” quickly turns into five more turns, which turn into another hour, before the player finally looks away from the screen to see that it is starting to get light outside. Knowing this, I’m not sure what I was thinking starting the preview build of Civilization: Beyond Earth on a Friday night.

By the time I finished for that session, I had played for eight hours straight and it was then four in the morning. Then I went to sleep, woke up four hours later, and started playing again, eventually logging almost a full day’s worth of play time in a single weekend.

Yes, this is still Civilization through and through, but there are some new concepts included that impact gameplay in significant ways. Though there are clear connections, Beyond Earth is far more than just a reskinning of Civilization V. 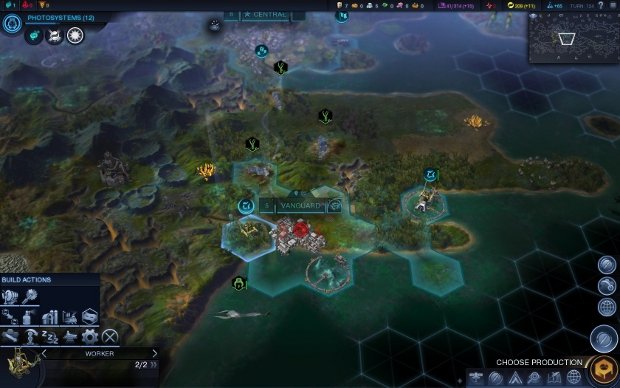 Those who have played Civilization V will see a lot of similarities right off the bat. Cities need food to increase population, production to build new buildings and units, money (energy in Beyond Earth) to maintain improvements, culture to expand borders and progress virtues, and science to enhance capabilities. A colony’s health rating replaces happiness, but functions similarly: Healthy civilizations produce science and culture at their full potentials while unhealthy civilization receive a penalty. All of these pieces interconnect, and building a successful civilization means balancing each well.

Single-tile stations replace minor civilizations but function in the same way. Non-sapient alien lifeforms take the place of barbarian tribes. This is where differences start to emerge. Where players in Civilization V can take on barbarian tribes with relative ease, and the tribes disappear from the map over time, aliens in Beyond Earth are much more formidable, and they can be found from the beginning all the way until the 250-turn mark that signals the end of the game.

One such alien is the Siege Worm, which Dale was able to take down but generally should be avoided because they can one-hit kill most units, and they take very little damage from any military units before upgrades kick in. Pictured above is the lovely instance in which three Siege Worms decided to burrow up right in between two of my cities, wrecking my road between them and generally ruining my plans for about a hundred in-game years.

Another hazard that life on alien planets presents is miasma, a ubiquitous terrain feature that saps the hit points of human units but restores those of aliens. Depending on the terrain generated, some alien nests may be even more fortified than others, with miasma surrounding and protecting them.

What is interesting is that there are three philosophical schools of thought in how humanity may deal with the threat of alien lifeforms and miasma. Those who subscribe to the Purity ideal want to remain human while transforming the environment to suit their needs. Those who follow the Harmony and Supremacy ideals instead believe that humans must be adapted to survive in the world, though Harmony dictates that the adaptation should be done through biology while Supremacy dictates that it be done through technological augmentation.

A civilization on the Purity path will be more likely to clear out miasma from friendly territory to allow for better control of resources, while a civilization following either Supremacy or Harmony may develop research that allows them to benefit from its existence. The trichotomy brings to mind the Sir David Attenborough quote “Instead of controlling the environment for the benefit of the population, perhaps it’s time we control the population to allow the survival of the environment.” 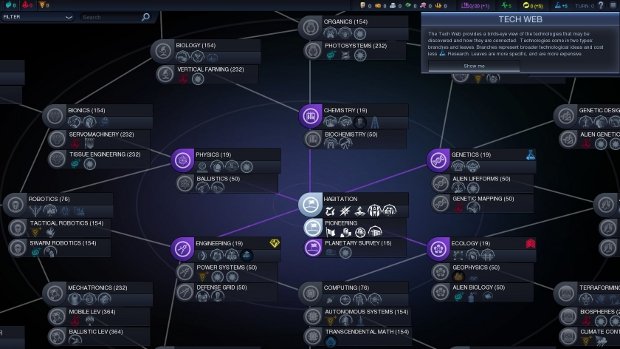 Despite there being three fairly distinct philosophies, there are not hard limits on what any civilization can choose. In general, advancing steps in any one branch involves researching a related technology. Since scientific growth follows a radial web rather than a linear tree, it is easy to broaden one’s scope and take on traits from any or all three of the ideas.

That said, it is generally beneficial to specialize in one philosophy. Some buildings and units require certain levels in one of the three branches, and unit upgrades are governed by the highest level affinity, so maintaining balance affords a greater breadth of abilities, but focusing on one grants more powerful abilities.

Another aspect of Beyond Earth that diverges significantly from previous entries in the series are the various victory conditions, which stem from the three affinities. While domination (control all capitals on the map) and time (have the most points after a set number of turns) are in play, there is no longer a strict technological victory, cultural victory, or economic victory. 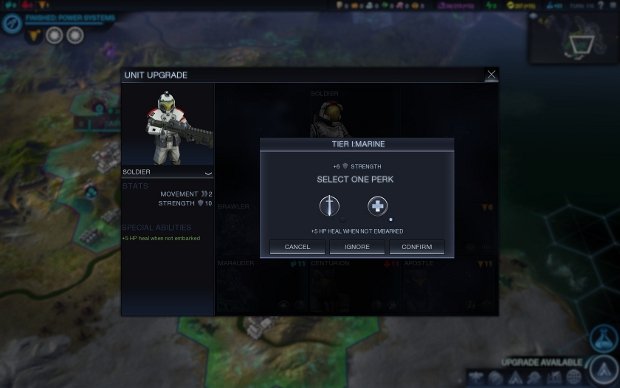 Each of those conditions requires at least level 13 with its respective philosophy. What results is a game where just about every victory is a tech victory. As a game based in science fiction, it makes thematic sense that technology is important for winning, and as my preferred path, it works for me, but it could be off-putting to those who prefer other avenues or a more balanced approach to civilization-building.

On that note, victory by any means other than having the most points when time runs out seems especially difficult (at least in the preview build). Even in a lush environment to maximize production and with my cities and trade routes set to crank science out at their maximum levels throughout the game, the closest I have come was completing the Wonder necessary for the Contact victory by turn 246, after which another 30 turns were necessary. Presumably the timer will be increased in the final product.

Another new element emerges from Civilization: Beyond Earth due to its setting. Where previous titles in the series have been basic retellings of Earth’s history, Beyond Earth is now telling a potential story of humanity’s future, which allows for more freedom in that department. To help shape that, missions now pop up from time to time, which provide optional objectives to work toward and offer a glimpse into how humanity got to this point and what it learns from this new planet. There is a scientifically important narrative to be discovered here, but it requires some effort and is just as easily ignored. 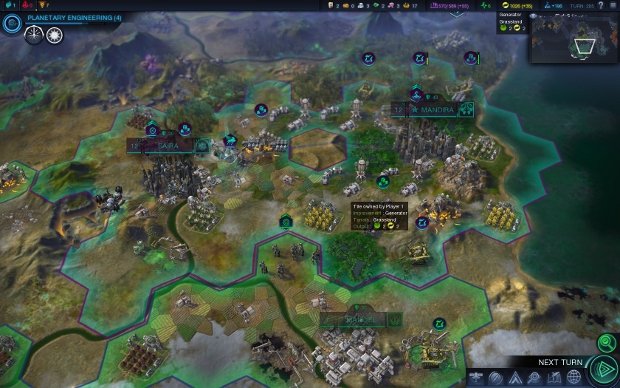 The terrain variety is impressive in some ways, but a little disappointing in others. While there are several options for generating the world layout (Protean is one large landmass, Terran has several Earth-like continents, Atlantean features many smaller islands, and other advanced options), the biomes from world to world do not seem very different from one another.

The lush worlds have more plant life than the arid ones, the taiga has more unusable tundra, but the same terrain types can be found on most worlds; only their proportions change. The same aliens are present regardless of which world is chosen. From a gameplay perspective it makes sense, but from the perspective of wanting to explore vastly different alien worlds, it is a bit of a letdown.

Graphically, Beyond Earth maintains the standard set by Civilization V, but it has the added benefit of extra color from being set on an alien planet. Seas are a vibrant green and mountains have an orange tinge. Individual civilization color schemes are futuristic, with a lot of teal, purple, and pink. A special note should be made about the soundtrack, which swells with intense string crescendos at the right moments, and otherwise sets the mood for interstellar exploration, which feels grand and important.

All in all, Civilization is looking as good as ever with Beyond Earth. It scratches that itch for building a workable engine and outshining one’s neighbors, while introducing a lot of new mechanics that change up the general strategy. The preview build seems pretty full-featured, but next month’s full release should remove the hard turn limit. Perhaps then the other victory conditions may seem more attainable. In the mean time, starting up a new game cannot hurt, right? (Send help please; I cannot stop on my own.)