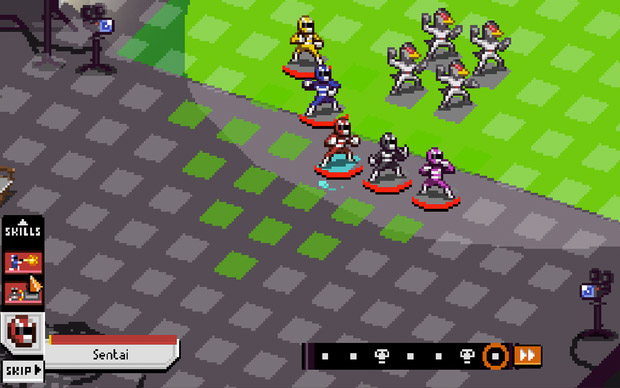 I know a lot of you are super spentai monetarily after Steam sales, but those still with dollars to give might want to spend some sentime with the Chroma Squad Kickstarter. In Chroma Squad, you’re tasked with managing a fresh sentai — think Power Rangers — TV series, in which you hire and customize actors, buy studio equipment, choreograph battles, record episodes, and more.

There’s some impressive minutia available; you can even send letters to your fans, chat on IRC, and create comic book adaptations of your show. Cross media! In fact, the Chroma Squad development team has released a web comic relating to the game’s story. So meta.

Chroma Squad will have a story mode with multiple endings, as well as competitive multiplayer. The team behind it, Behold Studios, has had some past success and shown an ability to deliver on a product. It’s responsible for the cute Knights of Pen & Paper 1. Well that helps explain why the pixel art in Chroma Squad is so damn good. I’m down for a humorous, fun, colorful romp through the world of sentai.