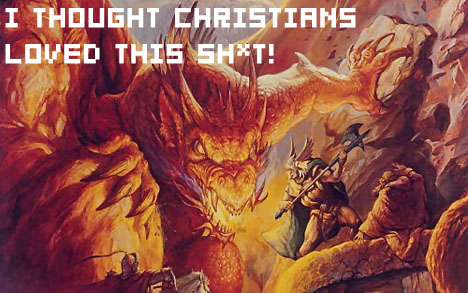 As you may well be aware, Dungeons & Dragons creator Gary Gygax passed away this year. His memory was classily honored by geekfest GenCon, who raised over $17,000 in an auction for Gygax’s favorite charity, the Christian Children’s Foundation. The CCF, however, has decided to refuse the money.

Why? Because the money was raised with the sale of D&D merchandise.

I really cannot get over how myopic and frankly despicable that is. Because the money came from a gaming convention, apparently it’s not clean enough for the good little Christian boys and girls that the CCF looks after. The group is claiming that this is about the “integrity” of its name, which it says it won’t lend to events it had no hand in.

If you ask me, refusing the money shows a far greater lack of integrity than accepting a perfectly valid $17,000. Would the CCF had turned down a donation from a Church bake sale? Somehow, I don’t think so. Filthy, Satanic D&D players, however, are not welcome.