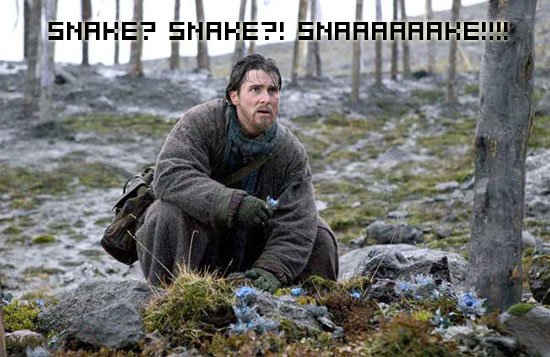 If anyone is going to try and pull off Snake’s deep and gruff voice, Christian Bale is the man to do it. Word is, the new issue of Nuts magazine (it’s a U.K. magazine — blame the brits for the funny name), there’s an interview with the Batman himself, in which he mentions that he’s gunning for the role of Solid Snake in the upcoming, and hopefully Uwe Boll-less, film adaptation of Metal Gear Solid.

Can the Dark Knight also be the man in the cardboard box? Christian Bale has taken on some seriously challenging phyiscal roles (see The Machinist), so the role of Solid Snake is easily something within his grasp. Let’s start the rampant speculation now! Who would be your ideal Metal Gear Solid cast, readers?

While you’re busy doing that, we’ll lock Dave Houghton in a cage until the new issue of Nuts is released, so he can give us all the juicy details.