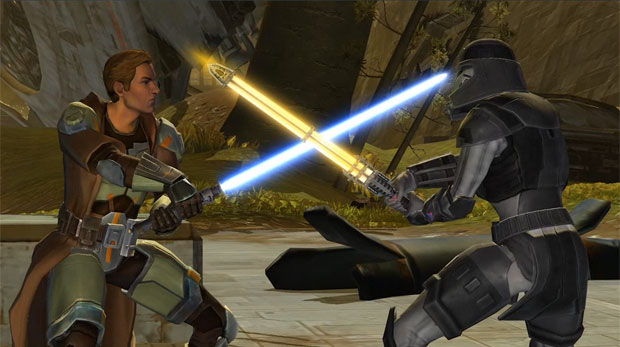 With Star Wars: The Old Republic being offered for pre-order as of last week, the excitement levels for the BioWare MMORPG are at an all-time high. Despite no firm release date announced, BioWare keeps pumping out the trailers for us to whet our appetites with.

This new trailer for The Old Republic shows us each side of the Jedi vs Sith conflict and the four classes that gamers will be able to pick from. The Jedi Knight, Jedi Consular, Bounty Smugler and Trooper will all be serving the Republic, whilst the Sith Warrior, Bounty Hunter, Imperial Agent and the Sith Inquisitor will all be working towards the glory of the Sith Empire. But let’s face it, if you’re like me the only choice is between playing as Han Solo or Boba Fett, right?

The actual in-game trailers for The Old Republic haven’t made as big an impact as the brilliant CGI trailers have, but I really like this one. The action looks great (albeit heavily edited) and putting that classic Star Wars score behind lightsabers and blaster fire always work. The voice acting is really good too, despite falling into the old trap of making all the bad guys have English accents.