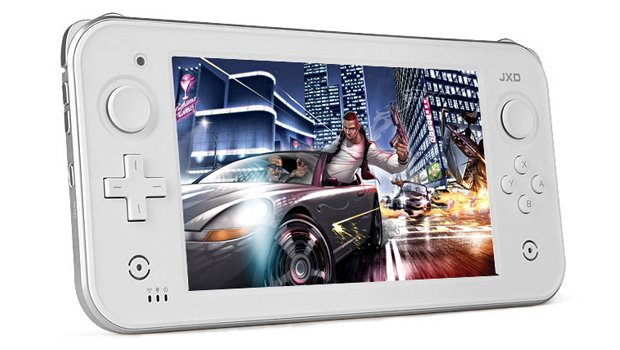 China made a knock-off a consumer electronics device? Whoa! Jane, get me off this crazy thing!

In truth, it’s not surprising that the Chinese copied the look and style of yet another gaming console or portable — anyone up for a round of WiWi golf? — but at least we know where such contraptions sit on the quality scale. When said contraption manages to outperform the device it’s copying, that’s a whole different story.

JinXing Digital’s S7300 GamePad 2 certainly looks like and is obviously named after the Wii U’s GamePad controller, but the similarities end there. Rather than being a controller for a base console, it is the console. This Android-powered portable is packed with tech in a form that’s actually thinner than the Wii U GamePad. The S7300 also has a five-point capacitive screen and can connect to the Internet via Wi-Fi, 3G, or Ethernet, and it can output a 1080p feed through HDMI for the full home console experience. Best of all, it can be purchased for as low as $140, which beats the pants off the Wii U GamePad’s $150 tag.

Of course, no Chinese hardware clone is complete without a pack of emulators — and despite a misleading image of Super Mario Galaxy 2 on the JXD page, Wii emulation is not among them. Still, that means you have access to a wider variety of retro gaming with this than with Wii U’s current  Virtual Console lineup of Balloon Fight and F-Zero — not that I condone illegal emulation, but I’m just saying.

I’m actually tempted to buy one of these babies for myself! If nothing else, the S7300 GamePad 2 suggests that a Nintendo console-portable hybrid might not be such a bad idea in the future.