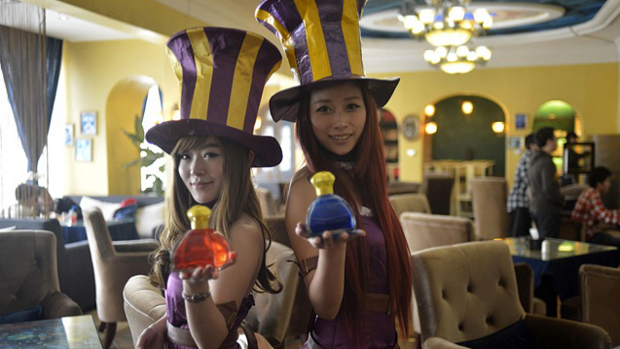 China is the land where dreams become a reality. Well, at least if you dream small and don’t mind bootlegs. A couple of days ago, a League of Legends–themed restaurant opened its doors to the masses in Chongquing, China.

Situated in a shopping mall rather than a dingy back alley where hobos yell at passers-by — questioning their parenting and possibly their sexuality — the restaurant plays host to cosplaying staff, a menu with food named after LoL champions, and a set-up that allows patrons to play some LoL while they eat.

According to the game’s Chinese publisher, Tencent Games, the establishment has nothing to do with them, and is completely unauthorized. Still, it seems like a hoot. I wouldn’t mind imbibing a beverage from a potion bottle as I nibble on some Ashe.

In China, There’s a League of Legends Themed Restaurant [Kotaku]