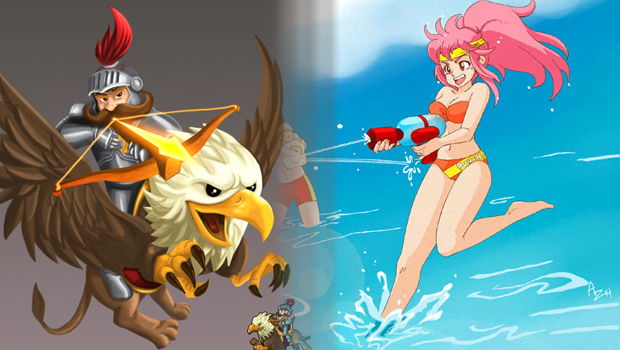 One of the things I love about doing Sup Holmes is that it allows me to talk with people who are in the midst of live changing experiences. some good, some bad. Such was the case with these two episodes.

The rerun above with Gryphon Knight Epic co-creator Sandro Tomasetti was unique in that it was the first times I had the opportunity to talk to a developer on a broadcasted live stream almost immediately after Destructoid posted a negative review of their game. To see how both humbled and frustrated Sandro was with the situation was both heartening and enlightening. He’s gone on to patch out many of the issues that Dtoid’s review had with his creation, which shows how dedicated he is to treating his audience with respect, regardless of how much of that respect is returned. He’s a class act.

Our chat with Kat and Eric, creators of Capsule Force, was a little less dramatic, but equally insightful. Kat is a classic extrovert, crackling with social energy, while Eric is more smoldering and calculating in his interpersonal style. The two met after Kat made fun of Eric for being a tall man, and that lighthearted mockery led to both a romantic relationship and a partnership in game development. Capsule Force is a clear result of that relationship, as it carries both Kat’s free-balling abandon and Eric’s mathematical mentality in equal measure.

Thanks to Sandro, Kat and Eric for popping on, and be sure to check out today’s live show with Bento Miso maestro and Fate Tectonics engineer Henry Faber today at 4pm EST. It’s going to be pasty.