The Child’s Play charity was created by Penny Arcade founders Mike Krahulik and Jerry Holkins back in 2003 to combat the negative stereotypes assigned to gamers by the media. Their goal, aside from combating these stereotypes, was to bring games, books, and entertainment to sick kids in hospitals. Since its beginnings, the charity has given over $3.5 million worth of donations to sick children in hospitals all over the world.

The guys at Penny Arcade have always been big fans of the geekier side of music. Anyone that follows their web comic knows that the duo and their readership enjoy alternative types of music, like nerdcore rap, game music and chiptunes and more. The massive concerts that they assemble for their fans for their annual Penny Arcade Expo manage to pack in thousands of fans every year.

For the first time, the Child’s Play has put together a music CD of their favorite groups, with proceeds of sales going directly to the charity. Child’s Play CD 2008 features Internet superstars Freezepop of Guitar Hero and Amplitude fame, king of Nerdcore MC Frontalot, Contra IV composer and game music remixing legend virt, geek culture songwriter Jonathan Coulton, video game cover band The OneUps and many more. All of the artists and groups have donated their time and music to the cause, putting together exclusive songs and new arrangements just for this collection.

Read on to get the details on this CD, as well as some insight from some of the artists.

On sale now, Child’s Play CD 2008 contains 14 tracks. There are several original songs, as well as a few arrangements from games and television.

Musical producer Mustin came up with the idea of a nerdy song collection for charity. He worked up a proposal and pitched it to Penny Arcade business boss Robert Khoo.  Mustin says that putting together the work of fourteen different artists was a daunting task, but was worth the effort in the end.

“The idea behind this CD was a no-brainer. I didn’t know why anyone hadn’t done it before,” said Mustin, the project producer. “But after its completion, I see why — it’s a lot of work for one person to oversee. The project was daunting but the money earned for the charity will be worth it. I hope we can do it again next year.” 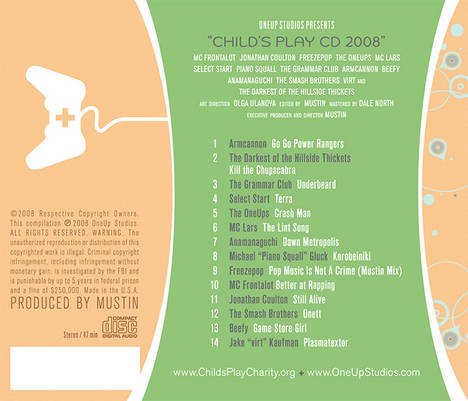 Destructoid got a sneak listen to the CD before it went to the presses last month. While varied, there’s something on Child’s Play CD 2008 for everyone. Nerdcore superstar MC Frontalot‘s “Better at Rapping” is a highlight track of the collection. He says that the song was originally written for The Electric Company, but never delivered.

“Now that it’s actually written and recorded, it is probably a little too dark in tone for either TEC or this Child’s Play CD, which is its ultimate home,” says Frontalot. “Sorry, kids!”

“It does, I hope, retain its intended message of self esteem, direct engagement with and (potentially) defeat of regret, and the embrace of practicing whatever you love to do.”

The Darkest of the Hillside Thickets‘ “Kill the Chupacabra” is a high-energy tune that will probably have hospital nurses cursing the track, as kids will be jumping out of their hospital beds to rock along.

“The Darkest of the Hillside Thickets are keen to continue their support of Child’s Play and have been saving the track “Kill the Chupacabra” for just such an exclusive occasion,” says Thickets lead singer Toren Atkinson. “We hope our nerd rock will, directly or indirectly, improve quality of life not only for our die-hard fans but also for kids confined to hospitals.”

A personal favorite is Beefy‘s original “Game Store Girl.” It packs a hefty load of geek and game references over slick beats, and then tops it off with a hook you’ll be humming long after the song is over. Beefy says that he is honored “to be on a compilation with songs influenced by Final Fantasy VI, underbeards, The Power Rangers, and lint.”

Beefy on his song: “I hope I’m not the only guy who’s fallen for a girl who works at a video game store. I like to think every male dork has gone through that before. It’s like a right of passage. They’re so pretty and they like video games. It’s like a tractor beam in girl form.”

He adds, “The album is like having a lot of the fun of PAX in your CD player, and the best part is that it’s for the kids.”

Child’s Play CD 2008 combines great music with a great cause. It’s something that’s definitely easy to get behind, and the music can be enjoyed by anyone, children included. If you’re still not convinced, and the cause of helping children in hospitals isn’t enough for you, OneUp Studios has samples of all fourteen tracks.