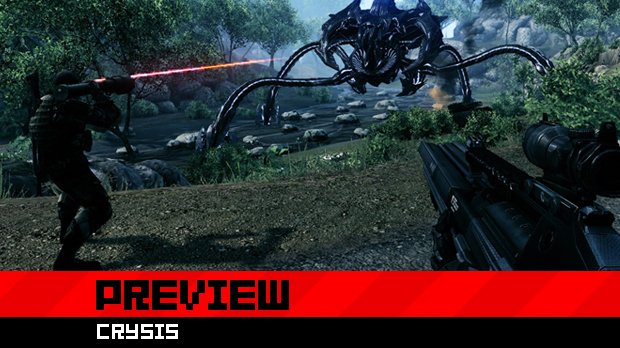 Many gamers cry foul these days at the linearity found in modern game design. Gamers looking for more open and adventurous shooters were given a saving grace with 2007’s Crysis. The game offered huge amounts of space and all sorts of crazy superpowers allowing players to plan attacks and let our imaginations go nuts with the different ways we could complete objectives. Oh, and it was the prettiest game of its time.

Crysis 2 would later come out and be a hit for PC and console players alike, but the original remained missing in action on consoles. That is until now.

The biggest difference (sometimes issue) between console and PC shooters are the controls. This is particularly important for Crysis as there is quite a bit of micromanaging with respect to the nanosuit abilities. For this port, Crysis recreates the controls scheme of its console sequel. If you’ve played Crysis 2 at length then you will be as immediately comfortable as I was with how this game handles.

Speed is activated by pressing down on the left thumbstick to sprint, and holding A (on Xbox 360) allows for Halo style frog leaps. Since the demo was fairly brief I didn’t get a chance to see how the iconic choke and throw is handled, but rest assured that it’s back and can still be used to pick up fish and crabs, among other environmental interactions.

My personal favorites though, armor and cloaking, are back and as much fun as Crysis 2. Throwing on armor and mowing down an enemy squad felt as satisfying as ever, and going Predator style with cloak and methodically picking off enemies feels equally badass. It’s nice to see games that truly allow for, and don’t punish one style of play over another.

Gunplay has made the transition to console smoothly as well. There’s the aim assists common in most shooters when looking down the sights, and the guns don’t have the greatest sense of weight when you carry them, leading to an overall smoother feel when in frantic combat. The weapon modding system of the series is of course here and still flaunts its patten intuitiveness. By holding down the back button you can bring up your weapon and customize its scopes, under-barrels, silencers and the like. It’s been a joy to use in past Crysis games and it’s no different here.

Graphically speaking, Crysis running on a consoles isn’t terribly different, but of course can’t remain the beast that it was on PC. I was told that our demo on the Xbox 360 was running on the equivalent of a PC high setting. Concessions have been made of course as the textures run at medium but can go a little higher when there isn’t so much going onscreen. I also noticed a little too much stuttering when loading parts of the map. It’s the price of trying to maintaining this level of visual fidelity in a sandbox game, but it crept in more than I was comfortable with especially considering the game is so close to release.

The prowess of the CryEngine not only means pretty graphics but also translates to the gameplay with Crysis’ destructible environments. They remain intact in this port, but just know know that we are not talking Bad Company levels of destructibility. Shacks, trees, and certain outposts are fair game but some concrete walls remained unaffected by my grenades.

Crysis was a beast of a game when it was released in 2007 and it certainly looks like it will be translated nicely with this port. It’s a little disappointing that only the single-player is going to be included in this release, but you could certainly do worse for $19.99 (1600 MSP).