Lucky enough to live on best West Coast, I’m privy to all sorts of videogames and fun stuff, connections with a website notwithstanding. One such experience is actually the Final Fantasy XIII bus, which Dale mentioned earlier this week. With a quick stop in my home city of Berkeley, the FFXIII bus was just sitting there waiting for me and the nonchalant middle school kids loitering around to get hands-on time with the game. That crappy camera phone pic? The results of my sneaky labors.

To make up for the oddness, they had the English language, Xbox 360 and the PS3 versions of the game set up. After waiting in line, chatting with said middle school kids, who mostly just found the bus by walking by, I was able to check out the game for the very first time. So what’s it like? Well, it is kinda weird seeing a Final Fantasy game telling me to hit the “A” button when I’m used to an “X,” and some niggling part of me wanted to be more judgmental on the game and find every example of aliasing I could. Even there however, it is a lovely looking game.

Walking on board the bus, I was treated to a small black chamber with Leona Lewis’ My Hands playing on repeat in the back ground. I was told the chorus had been playing on repeat for the last few hours or so, driving the reps crazy. Nice, Square Enix. Four screens were set up, two PS3 and two Xbox 360s. I had been given a ticket with “@playFFXII” printed on it, which game me admission inside over all the cool kids walking by. Sweet! Apparently if you get a pink one, you’ll be entered for some prize (I got black). Good luck for the pinks!

So what did I play? Well, they had on display a later point in the game, at some bright space port. I had a team of Lightning, Hope, and Fang, and let me tell you, the battles are effing chaotic. I spent so much time jumping between attacks, Paradigm Shifts, summons, and class changes, I couldn’t ever pay attention to the battles, or even the health bars. I hope as an expereinced player I can enjoy it, because right now I had no idea what I was doing. At my skill level, it feels like finesse takes a backseat. I almost wish I could slow the game down a bit so I can appreciate it. Oh well.

Also, since I never got far in FFXII, I never had a chance to play a FF game where you control only one character. It’s honestly a bit of a disappointment not being able to choose what the others are doing, especially since they are busy flipping through the air while I struggle to cast a Fire, or make combos, or change classes quickly. I don’t care if my impressions sound like the whiny bitching of a bad gamer, it’s my hands-on, and you can go suck it. My mom tells me I’m awesome all the time. 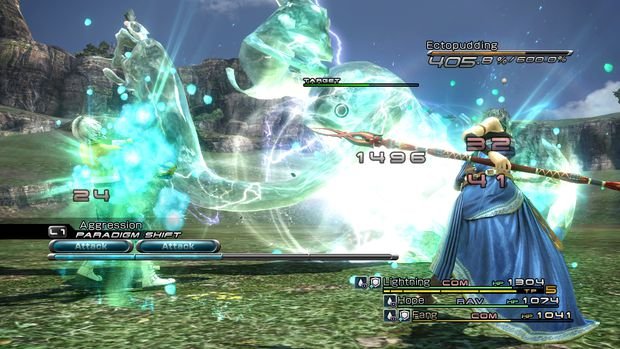 Bringing the Odin summon was beautiful, as Lightning flips and stuff all over the place. Once she rides him like a horse and weilds his massive swords (did I just write that?!), you get all of these attack options and the action gets even faster until his timer dies down and the little blond kid and the manly woman come back to fight with you, flipping the s**t out while I fumble through the menu. Again, it’s all hard to keep up with, but whatever, I must suck at it or something.

My favorite part of the game is the class changes. Paradigm Shifts are actually really cool. It seems you make pre-arranged teams of character jobs, and you jump back and forth when they need to be used. It’s like your whole team is a united entity, and each character is one part that makes up that entity. Say an enemy is beating you down? Paradigm Shift to a team of two healers and a bruiser, which would be a very support and healing focused team. Do your healing up, and quickly shift back to a team of bruiser, magic user, and some other class to deal out damage. It all happens very fast, with the click of the L-Bumper. It looks like a lot of planning and setting up of these Paradigm Shifts is going to take place outside of action, so fans of FFXII might appreciate this element. No longer are you making someone a dedicated healer, or magic user or whatever. It seems like you’ll be making someone a dedicated magic user in a specific situation, or a tank when the time is right.

In the midst of all of my complaints about not knowing what to do and struggling through areas, I have to say that given my short time with the game, I certainly want to play more. Yeah, even on the 360 version, it is a stunning game. While things are crazy on screen, that’s a testament to the fact that I want to actually see what is going on. Considering manyRPGs have bland and boring battle systems, this is a nice direction for the Final Fantasy franchise to take things. It looks like the FFXIII bus is going to be Bay Area-only, so if you are a local lucky duck, keep following that Twitter link, and maybe you too can see what the fuss is about.