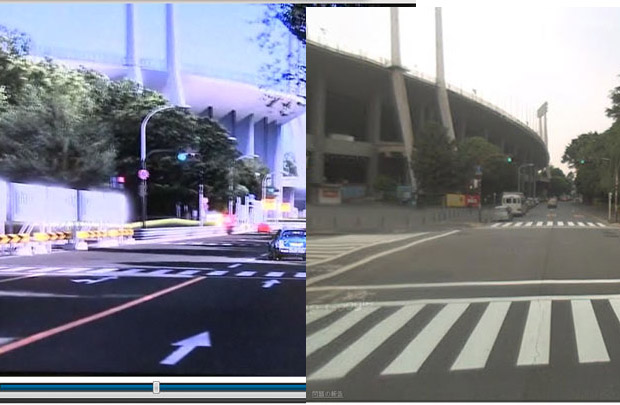 This morning, in the office, I said that I was so excited about Gran Turismo 5. Destructoid Editor-in-Chief Nick Chester replied, “I have to say, I don’t get it.” And then he remembered: “But then again, you don’t get the music game peripheral thing.”

That’s okay. Everyone does not have to get Gran Turismo. But those that do are just as easily excited about the game as I am, despite the insane length of time it has been in development.

This Japanese blog has side-by-side images of real-world Japanese locales set next to screencaps of a GT5 replay shown at gamescom last week. It looks like Google Maps supplied the other half; f*ck going outside, right? This track is set in Tokyo, in the Akasaka area. The image above compares the side of a stadium there — very impressive.

The team at Polyphony Digital did their homework, taking tens of thousands of pictures to make the courses as real as possible. After the jump, you can check out a full video of the R246 course. Watching that, I think they did a fantastic job.