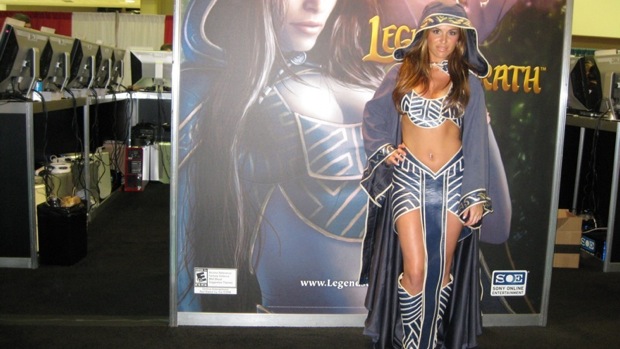 The software side of Gen Con 2009 is lacking this year. It’s depressing to see so few videogames lining the West side of the convention floor. With crushed spirits early in the morning, I turned my attention to the costumed peoples roaming the Indianapolis Convention Center for a temporary but cheerful lift. The gallery below is an excellent representation of what I’m seeing at the event. There are a few costumed and scantily clad booth babes, more than a few pirate wenches, an angry Twi’lek, togas, Solid Snake, and much more.

There’s a reason the girl in Twi’lek garb and paint (in the gallery) isn’t the happiest camper. She arrived roughly an hour before the show floor officially opened to attendees. As I debated walking to the other entrace, she rushed into my vision and frantically started trying to open the doors. The people around me instantly whipped out their cameras and asked for pictures. She obliged, of course, but obviously had somewhere to go fast. After about two minutes — more and more people started snapping images — her face twisted from complacency to anger.

Eventually, she clicked off the lightsaber and hurried the other way. I hope she got to where she needed to go without being hassled too much. As she bolted, a guy on my periphery exclaimed, “Run Twi’lek, run!” Poor girl.