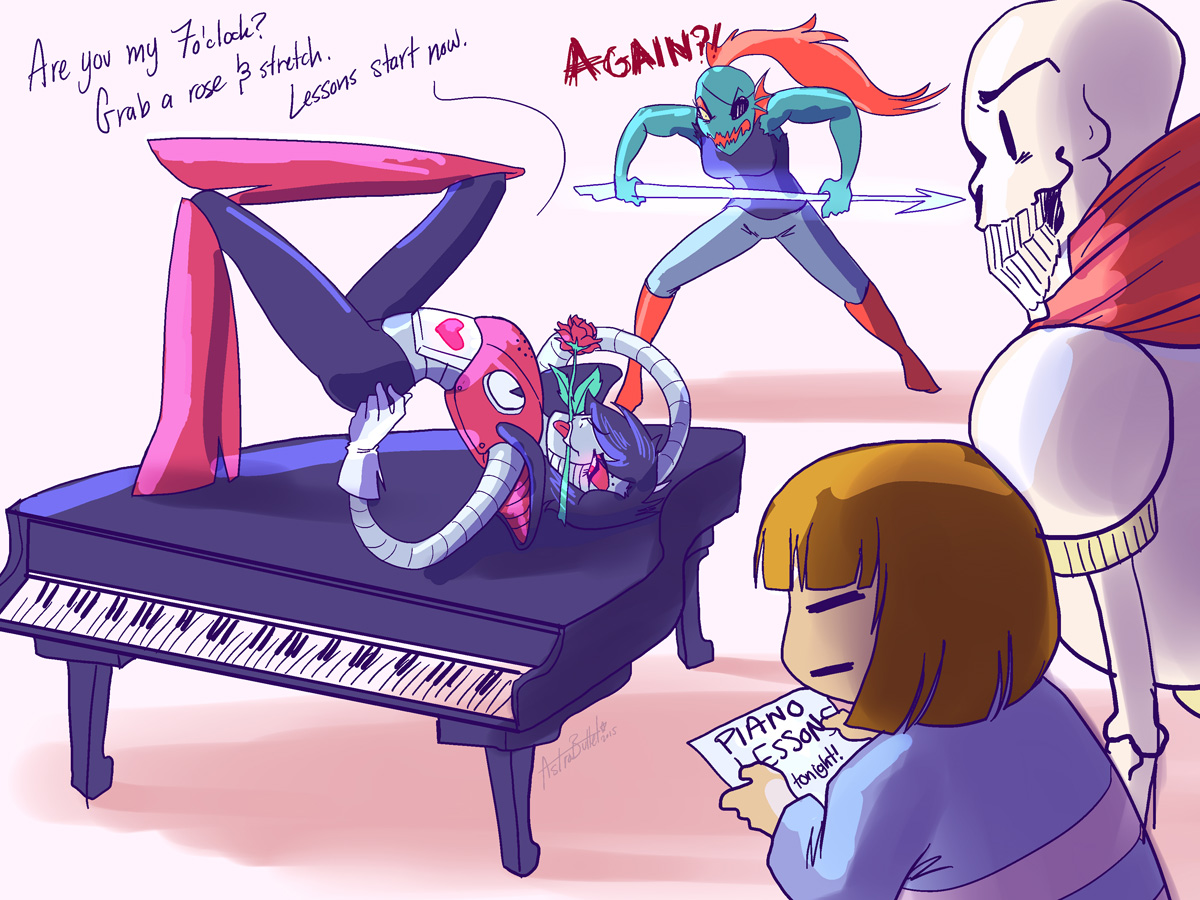 You posed dramatically. The audience nods.

[SeymourDuncan returns to the FP to grace us with his musical endeavors! This time, he’s done up an entire EP for Undertale, just in time for the game’s one-year anniversary! Be sure to pay attention to what he has to plug at the end of the blog for more community participation fun! Header courtesy of my friend, Astrobullet. ~Strider]

Some three or so months later, what was originally intended as a small side distraction to break up the tasty monotony of working on my Persona/SMT album has since blossomed into an entire EP of some stuff I now really want people to look at, listen to, and enjoy! If you can only spare a looksee, then I hope you still enjoy it! But, make sure you feel bad later.

Basically, this is kind of a big deal. I’ll save my big, lovely, inspirational tale of my sudden startup in songwriting approximately six months ago for when I release my Persona/SMT album as that is my true passion project. In the meantime, let us do a small discussion about why I specifically chose Undertale as a concept for an EP.

Album art, courtesy of our own Inquisitive_Ravenclaw!

A short time before I began to really truly appreciate the platinum-tier majesty that is Undertale the game, I was plugging my eardrums full of Undertale the soundtrack. The sorts of sounds that one could feasibly mistake for your run of the mill indie-bit soundtrack, but for radtazcular folk like myself it was clear that a special level of craft went into the making of these tunes. While Toby Fox did employ some trademark Seymour-styled tactics (retrofitting old music to work with your current project), for which I am deeply flattered, there’s not much in the way of overstating the quality of the actual work.

There is a certain nuance to many of the tracks that you’d typically only catch onto in older works from the absolute best in the biz. An obviously comprehensive knowledge of both the genre of classical (is it old enough to be called such a thing?) video game music and the classical inspirations such as Final Fantasy and, of course, Mother/EarthBound. Said nuance to much of this music lends incredibly well to what will, no doubt, go down as a classic video game with a just as memorable soundscape.

It was also something new to try amidst the plethora of work surrounding my other project(s). So, I just had to pay it some tribute!

A little insight into each track…

“Death by Glamour” – This was what sort of started it all. In many ways, the perfect opener to the album! I happened to be working on this cover, on a whim, during this year’s Pride Month. I found it incredibly fitting to release during such a time, given Mettaton’s ambiguous sexuality and general fabulousness. Working as hard as I did to get it out before the end of that month was what spiraled me into working on this album!

The original release of the cover had some terribly awful bass issues. This was before I realized how different everything could sound without blasting each track through my wubwub headphones.

“Sweet Nothings” – The first original track I began work on.

It was difficult coming up with an idea for what could’ve been one of the background tracks to Undertale. I initially tried implementing something similar to Undertale‘s “Ruins” (more on that later), but it ended up sounding far too random. I hadn’t been super used to writing melodies like that, where they gracefully glide across many measures rather than constantly change like a solo. What I found far easier was to do something a little more ambient than my usual works.

I then simply used imagery from the game to guide me from there! Somehow, the echo flowers (an aspect of Undertale‘s lore I wish had been explored just a tad more) stuck out to me.

“Omega Medley” – Very quickly, I had assumed this would be no more than, at best, a bonus track. At worst, a simple riffage exercise that would likely be deleted some time after completion. But, I ended up putting more effort into it than I thought and, by the end, I rather liked it! Was fun trying to grasp the unhinged nature of Omega/Photoshop Flowey.

“Ruins (Deeper Down Mix)” – Probably one of my proudest accomplishments! The original is easily a top five from Undertale‘s soundtrack.

As I’ve already mentioned, I had, at one point, tried to emulate the sort of sounds in “Ruins” for my first original creation. But, it wasn’t sounding particularly top notch. Call it, perhaps, trying too hard? Anyway. That eventually sprouted a good ol’ fashioned “Fuck it.” in the form of just covering what had been inspiring me.

(I do still have the project file for that song I was attempting to write, which I may turn into something someday.)

“Loaded Question” – While Mettaton’s first form already has a boss fight tune in the name of “Metal Crusher,” another favorite (though, a lot of the songs from Undertale are my favorites!), I decided to give that lovable box of circuits and showmanship an alternate take.

Taking some cues from the quirky “Metal Crusher,” I eventually ended up with something very lounge/jazz-y with a distinctly robotic flavor.

I had fully prepped an extended breakdown to this one, but had little idea as to where to fit it as the song was already fairly well-paced as is. Perhaps I’ll also, one day, make that breakdown into something!

“In This World…” – I didn’t think I would’ve ended up with not one, but two original boss fight tunes!

What begins with an appropriately unassuming, happy-go-lucky lick is my take on a hypothetical tutorial boss fight during your first encounter with Flowey. For that reason, I didn’t want it to sound too intimidating, but I definitely wanted it to sound opposing or evil. Encompassing of Flowey’s underlying wickedness and spastic, warped facial expressions in a package so seemingly innocent.

“The Drizzle Outside Underground” – This final track is, hopefully, my best of these seven.

What started as a cover of “It’s Raining Somewhere Else” became something merely very loosely based off said track, frankly, out of frustration. While I do love spicing up my covers with original instrumentation or even entire new sections, at times, I simply don’t have the patience to tab out songs. Playing by ear is something I’m still pretty damned mediocre at. It was, honestly, waaaaaaaay easier to just craft something (mostly) original.

And that’s all I wrote!~

If you care to tip me (as I can’t, as of now, ask for any direct funds from my work for many reasons) and give me some extra funds for my local Comic-Con late next month, follow this here linkage: paypal.me/tinyphasers

But, you can download each track, individually, FOR FREEEEEEEEEEEE right here: https://soundcloud.com/justin-stewart-57/sets/undertale-underground-ep

And, finally, PLEASE GIVE ME FEEDBACK!!! I’M SO EXCITED!!!