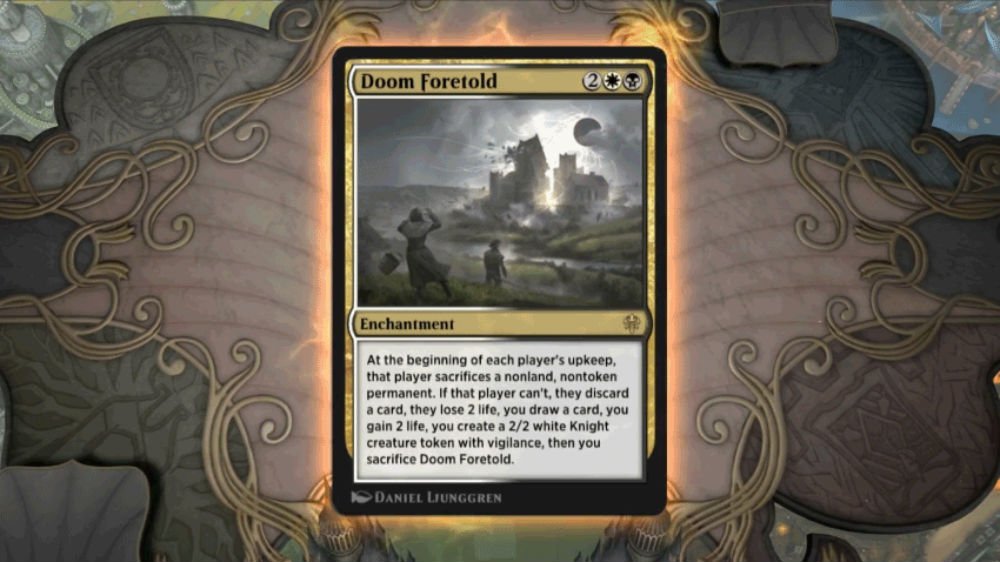 The next expansion up for Magic: The Gathering is Throne of Eldraine, a take on the Arthurian Legend and Grimm fairy tale motifs. Said set officially arrives on October 4, 2019, with a pre-release ceremony the weekend of Friday, September 27, and an Arena launch date of September 26. But before then, we have an exclusive reveal for you on the 20th anniversary of the unofficial video game holiday of 9/9/99.

The card is Doom Foretold, a White/Black four-cost multicolored card that could fit into some Esper/Hero decks and has some killer art. Here’s the description of the enchantment: “At the beginning of each player’s upkeep, that player sacrifices a nonland, nontoken permanent. If that player can’t, they discard a card, they lose a lose, you draw a card, you gain two life, ten create a 2/2 white Knight creature token with vigilance, then you sacrifice Doom Foretold.”

This has a lot of potential in limited, as four cost is par for the course for a lot of enchantments, and can make short work of some fairly powerful bombs (if someone drops an 8/8, you throw this down, then they immediately need to sacrifice it on their turn if it’s the only thing on the table). Once they’re whittled down the activated ability isn’t too shabby, even if it lacks easy recursion.

There’s better tech, especially in this current meta, but when the rotation happens soon enough and Ixalan/Rivals/Dominaria/M19 are gone, it could find its way into some setups.