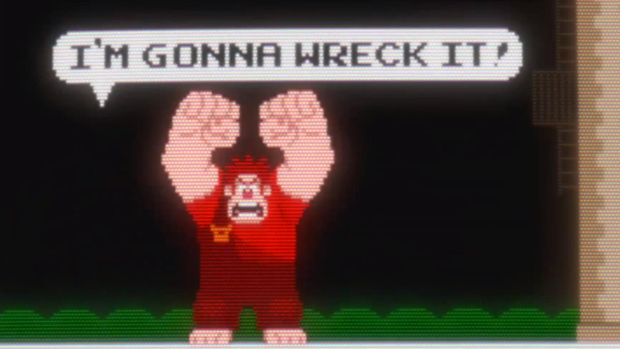 Hello! I’ve just reviewed Disney’s new animated flick Wreck-It Ralph over with the fine and handsome people over at Flixist. Here’s a little taste of what I thought:

Almost immediately, there’s a weird dissonance in Wreck-it Ralph, Disney’s love-letter to the 80s/90s age of arcades. From frame one, where the film begins at the arcade that is home to all the characters and games we’re about to meet, hitting those gamer nostalgia buttons is clearly one of the film’s top priorities. You’re assailed by all the bloops and bleeps that helped to make the arcade such a special place in the hearts of children (including this one). There’s some Galaga and Space Invaders in the corner, along with newer, modern racers and light gun first person shooters. Aside from the fact that this is an independently-owned arcade that seems constantly well-attended and in no danger of closure, this could be a scene from any childhood from the 1980s onward.

The problem, then, is the fact that Wreck-It Ralph, while clearly meant for the older gamer crowd, is written with much younger, less-savvy kids in mind. After all, what eight year old is going to recognize Neff from Altered Beast, who is weirdly prominent in all the film’s advertising?

Want to read more? Check out our full review over at Flixist!