You get couch co-op whether you like it or not

[Update: Frima Studios has reached out and informed us that it miscommunicated its statement about not being able to clear the game solo. The game can be beaten singleplayer, but only about 80 percent of the optional paths are accessible without a cooperative partner.]

Of all the titles on display at IGN’s independent games mixer at GDC, I couldn’t help but be intrigued by one in particular. It was kind of tucked away in a corner, but that didn’t mean that it wasn’t getting its share of traffic. That’s because it immediately looked cute, colorful, and challenging — three criteria that certainly help indie games flourish. At first glance, it seemed like the kind of game that could win your heart in an instant.

The game in question is Chariot, a co-op platformer by Frima Studios. Chariot‘s centered around a princess that’s out to take her recently deceased father to the resting place of his choosing. She does this by lugging his casket through perilous ancient caves in an effort to please him.

That’s easier said than done though, because it turns out the king is kind of high maintenance. (What king isn’t, I guess?) He’s more concerned with being buried with as much wealth as possible rather than actually being laid to rest. Each level features a ton of jewels and treasure to try to collect in an effort to appease him.

This accumulation of fortune won’t go uncontested, however. There are enemies that ambush you with the sole intent of taking whatever you’ve earned thus far; you won’t die from enemies in Chariot. While you have attacks to fend them off, killing them won’t be your aim. As executive producer Martin Brouard put it “you just want to get the hell out of there.”

Aiding your efforts to find treasure, fight off monsters, and navigate your way through the levels is the inclusion of gadgets. One gadget can be selected per level, each of them performing different, yet vital functions. The Canary attracts and blows up enemies, the Peg holds your rope for a few seconds, the Attractor pulls everything closer, and the Repulsor pushes everything away.

Just because any particular level has an easily identifiable way to the exit doesn’t necessarily mean it’s the best path to take. Exploration leads to increased wealth and introduces some varied mechanics. For instance, life paths can only be touched by the characters, meaning that the king’s casket will dangle precariously underneath. Conversely, death rails can only be touched by the coffin, leaving the characters to swing from its ropes below. 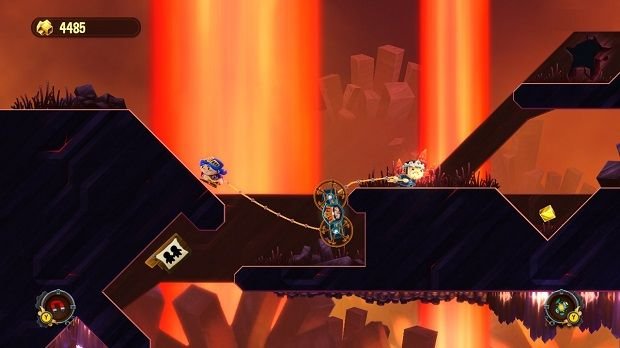 However, the mechanic that is going to ultimately define Chariot is the way that it treats co-op play. Players can have a solo go at the game, but according to Brouard, only about 80 percent of it can be beaten alone. To finish it, you will need a partner. It’s worth noting that Brouard made mention that seriously skilled players will be able to complete Chariot by themselves through unique manipulation of the platforming environment, but this won’t be the standard case.

Compounding the issue, Chariot only offers offline co-op play, so those with no one interested in joining will have a tough time. I can’t help but wonder how wise of a design decision this is. It seems like an unnecessarily high barrier to entry, and that’s before considering that some people may buy the game not knowing that condition exists. Regardless, it’s sort of admirable that Frima Games is sticking to its guns and crafting the experience that it wants to make.

All in all, Chariot looks like it’s shaping up to be a wonderful platformer for Xbox One, PS4, PC, and Wii U. The adventure is designed to be a grand one to share. You just better make sure you have a willing friend lined up.