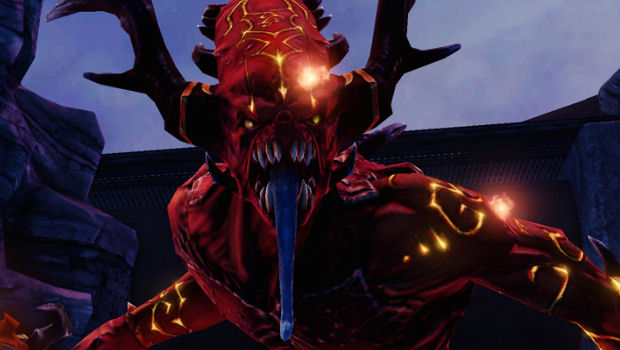 Destructoid is pleased to exclusively reveal (in the US, anyway) that you won’t just be gunning down Orks in Warhammer 40,000: Space Marine. The demonic forces of the Chaos Space Marines are in on the action, too!

We have artwork and screenshots for the Chaos forces, which includes not only Space Marines, but the Renegade Guard and demons to boot. They have a sinister purpose on Forge World Graia, and as Ultramarines Captain Titus, you’ll need to wipe them all out.

Check out the screens, and read below for our exclusive interview with game director Raphael van Lierop … where he admits he lied to me about Chaos being in the game! 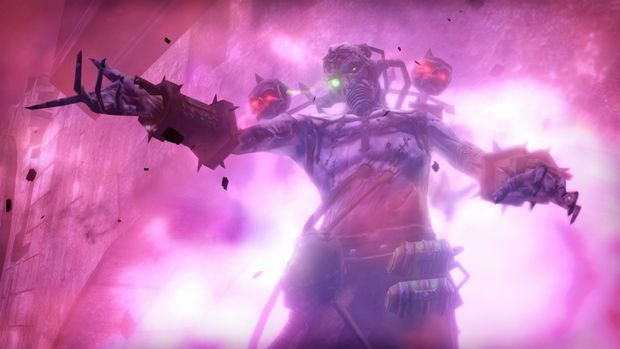 Destructoid: So, what are these guys doing in the Ultramarines’ neck of the woods? Which chapter are they, what are their goals, and who’s the bad guy in charge?

Raphael von Lierop: We’re not really getting into story details yet, but there is definitely something more sinister happening on Forge World Graia than just a massive planetary invasion by Orks. While the Orks have fairly straight-forward motives, the forces of Chaos are more devious and have, as you might expect, a much darker plan, involving our hero Captain Titus.

The threat of Chaos ‘taint’ is an ongoing fear for any Space Marine, and Titus will have to face some truly epic trials to survive the machinations of Chaos on the planet. This is the stuff of legends.

Dtoid: When the game was revealed last year, we were informed that Chaos would not be part of this game. Were you being naughty liars at the time, or is this something you decided to add into the game after the initial reveal?

RVP: I had to develop a whole set of slippery answers to try and talk around the question of whether you would only fight Orks in the game, to avoid lying about it. But, I had no way to dodge it when you guys threw the question at me point blank. My brain thought “don’t confirm Chaos is in the game!”, my mouth said “Chaos isn’t in the game!”. So, I guess that was a naughty lie. Sorry! I feel bad about it.

Dtoid: So why did you put Chaos into the game as well as the Orks? What are they going to bring to the table in terms of gameplay?

RVP: We always intended for the game to be about more than fighting Orks. Orks are a perfect enemy for Space Marine because they give us a great opportunity to show off our combat mechanics when you’re constantly surrounded by hordes of enemies. With Chaos, we wanted to add another layer of gameplay depth, throwing a curveball at you, to make sure we keep players interested and on their toes. So, you can master mechanics and tactics against Orks, and then we throw a whole different enemy at you that gives you something new to learn, providing new and interesting challenges using the skills you’ve developed as a player. 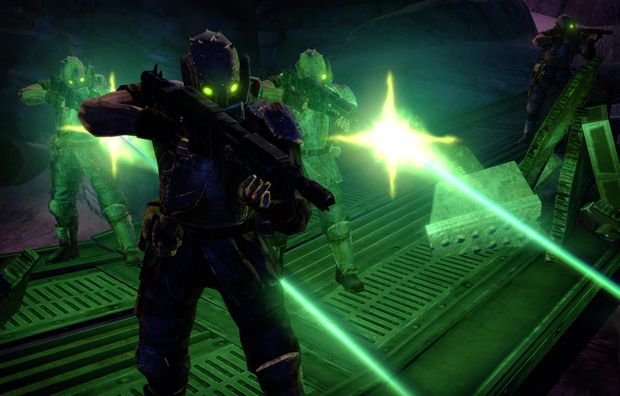 Dtoid: Relic expressed concern before that having Chaos Marines as enemies would be problematic, due to their power being on par with an average Space Marine (thus it would be unbelievable to have them mowed down like disposable enemies). How is Relic dealing with this issue? Will the Chaos Marines be sporadic, almost boss-like enemies a’la the Fire Warrior game, or will we be suspending our disbelief and cutting them down in bloody swathes?

RVP: While Orks attack in brutal and animalistic hordes, Chaos is a much more devious enemy, with the Chaos Space Marines being lethal in small numbers. But, we’re not trying to create a 1:1 threat relationship between the Chaos Space Marine and Captain Titus, who is, after all, an Ultramarines Captain and an especially powerful fighter by any standard. But while Titus can fight 30+ Orks at once, fighting 2 or 3 Chaos Space Marines presents a serious challenge. Then when you layer in Chaos fodder and ranged specialist units in there, the game definitely becomes challenging in whole new ways.

Dtoid: What kind of units can we expect to see from the Chaos forces? Cultists, demons, maybe a Defiler or two?

RVP: We have multiple types of Chaos Space Marine enemies, equipped with a variety of heavy weapons (ex. Autocannon, Plasma Cannon, etc.), Snipers, and some can pull out melee weapons and engage you in close quarters. Additionally, we’re throwing Renegade Guard at you — who can present a real ranged threat when they attack en masse. There are Bloodletters, intimidating demons, who are a very high-damage melee enemy — they attack in groups and kind of ‘phase’ in and out, making them very difficult to target with ranged weapons, and when they get up close they attack you with vicious swords and rending attacks that can take you down quickly if you’re not careful.

There are Psykers, who can damage you from afar with psychic blasts and warp in other enemy units to mess with you. So, just like with the Orks, Chaos presents a lot of variety and gives us tons of opportunity to layer the enemies together in interesting scenarios to provide a challenge that really puts a whole new spin on the game by the time you encounter them.

Dtoid: Can Sean Pertwee be in it? He plays a badass Chaos general.

RVP: We would love to have Sean Pertwee in the game! Right now we have all the voice talent we need, but perhaps he’d like to lend his voice to the sequel.