With Ace Attorney creator Shu Takumi behind the upcoming Ghost Trick: Phantom Detective, the expectations for a quirky, original title are already astronomical. After spending about 20 minutes with a demo version of the game (a tutorial and introduction to the game’s world and characters), it’s obvious that Ghost Trick will meet those expectations, with a rather unique game mechanic and presentation that’s like nothing else on the Nintendo DS.

Ghost Trick is one of the few games that begins with your character already dead. Murdered. Lying face down on the ground of a junkyard, the pointy-haired, shades-wearing Sissel regains consciousness, but in spirit only. In this spirit form, he’s witness to another potential murder — a tall, thin, blue-skinned man stands with his gun pointed at a young girl. A mysterious voice calls to Sissel, guiding him and showing him how to use his powers in the spirit world to possess and manipulate items in the real world, “ghost tricks” if you will.

With a simple tap of the screen it’s possible to go into the spirit world; items that can be possessed and potentially manipulated by Sissel’s soul will appear as blue. You start by dragging your soul, a blue orb, with the stylus to a nearby object. Objects must be within “reach,” and in order to gain access to further items, you’ll have to leap from one to the next, forcing you to find various paths within the spirit world.

Once the object you want to possess is reached, that’s where the fun starts. By tapping the “trick” button Sissel’s soul can make an object react in the real world. In this first example, I hopped from Sissel’s body to a nearby crossing rail as the events between the man and the girl unfolded. By using ghost powers, I was able to make the crossing rail shift, hitting the armed man and allowing the girl to make a temporary escape. Keyword “temporary” as the man catches up with her, and I’m forced to hop between a few objects, landing in a guitar lying in a junk pile. Using ghost powers, I strum it on the strings, the sounds startling the man and allowing  the girl to make another run for it. 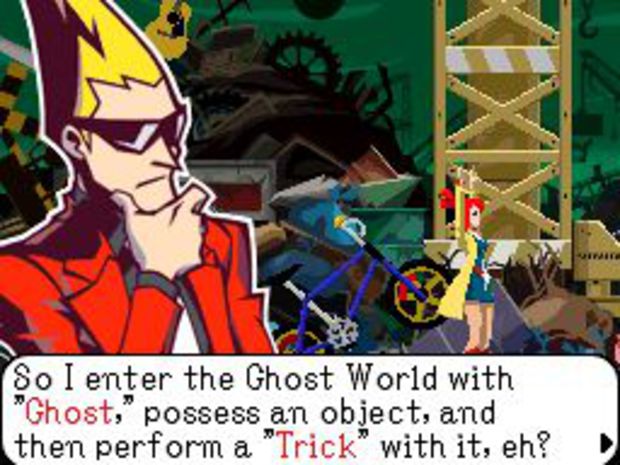 In this scenario, the girl doesn’t get very far, and the man eventually pulls the trigger. Even with all of Sissel’s ghost powers, the girl can’t be saved. But he has yet another trick up his sleeve — the ability to turn back time and change fate. After scenes like this play out, it’s possible to turn back the clock four minutes, manipulating events to change possible outcomes. During this time, the clock runs down in realtime, the events unfolding once again before you.

In this sense, Ghost Trick is a bit like a puzzle game. Given only four minutes to change events (you already know how it’s supposed to go down), you have to think fast and react quickly as you hop from object to object. And it’s not just as simple as doing just that. The game doesn’t necessarily make it easy — what fun would it be if all of the objects were lined up towards your goal?

In the demo, for instance, I had to trigger a refrigerator door to open, which rolled a blender into a rope that was connected to a pulley that then raised a flag. Once the flag was hoisted up, I hopped over into a fan which, once turned on, blew the flag in the direction of a previously unreachable object. Even in this most simple puzzle (it will presumably get more complicated as the game progresses) I found myself scratching my head, carefully eyeballing each object for potential outcomes. All the while, the four minute countdown applied pressure — the fate of the girl, a fatal gunshot, was drawing near. Fortunately, I was able to make it to her and change her fate on my first run. But had I made a misstep or simply couldn’t piece together the environment in time, it’s possible to rewind and retry scenarios indefinitely.

Going into it with almost no expectations, I was surprised at how clever the game was in terms of both its gameplay mechanic and dialogue, which shares the same off-kilter humor of the Ace Attorney series. It’ll be easy for such a strange title like Ghost Trick to be overlooked at retail by the mainstream — it’s not conventional in any sense. But I have a strong hunch that Capcom has its next darling sleeper hit on its hands, and that hardcore gamers are going to eat up when Ghost Trick hits shelves this winter.