The first thing to understand about Champions Online is that it is not City of Heroes 2: Hellions’ Revenge. They’re obviously similar, and it would be insulting to suggest otherwise, but the development of Champions Online has had the benefit of a supremely rich history, starting in 1981 with the first publication of the Champions tabletop RPG. The role playing roots of Champions Online are steeped in adoration, thanks to the original tabletop game’s HERO system, a somewhat complex framework which for many was hit or miss.

It’s obvious that for the folks at Cryptic, Champions hit and hit big, and that passion for the original IP comes through in Champions Online. During a recent tour of Cryptic Studios I had an opportunity take in some of the superheroic sights and got a second-to-none education in Champions Online.

Incinerate the jump with your eye-lasers for some hands-off impressions of Champions Online and its denizens.

Arguably the largest new feature that Champions Online brings to the superhero MMO table is its planned release for the PC as well as the Xbox 360. Releasing an MMO for a console isn’t exactly a new idea, but it isn’t exactly common either. Where the Cryptic team hope to further distance themselves from common MMO’s is in the ability for Xbox 360 players and PC players to play together. Microsoft has yet to confirm that this functionality will be available, and the feasibility of doing so while avoiding the looming threat of eventual server shutdown remains a hurdle. It’s an ambitious goal to be sure, but it’s also a level of interactivity Microsoft would be foolhardy to ignore. 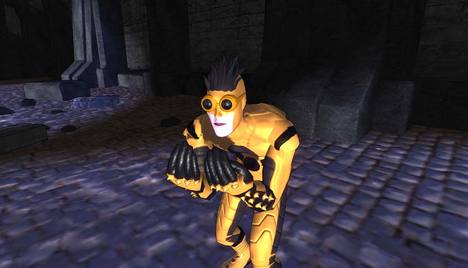 In addition to availing themselves of a sorely under-tapped market in MMO’s, Cryptic has gone in and revamped their character creation system. The focus here in Champions Online is total customization. The days of nagging details on your hero being slightly off are over. But the focus on customization doesn’t end with character creation.

As you play through the world of Champions Online, defeating henchmen and collecting loot along the way, you can equip items to aid in your wanton, blood-soaked vigilantism, I mean..uh, heroics. But if you don’t like the look of a plasma blaster or hot-pink, thermo-nuclear monocle you can alter or re-color the item, or simply set it invisible entirely.

Going even further, you’ll be able to design your own arch-enemy at the outset of your game. With options to customize everything from the appearance of your nemesis to their abilities, this is just the deliciously evil cherry on a tasty heroic cake designed to your specifications alone. 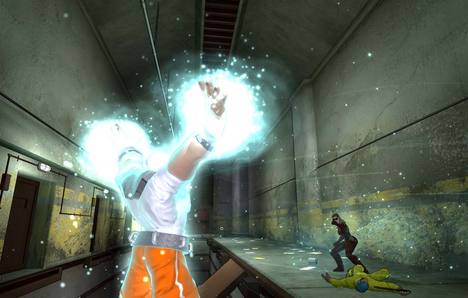 But what the hell good is it having a dazzling avatar if it still has to shuffle its feet waiting for powers to recharge while all around it an epic battle wages? None, as my woefully underused COH account can attest. Which is why the Cryptic folks didn’t rely on the standard MMO combat template; instead blending a mix of MMO style play with action game style play to cut through the occasionally anti-climactic combat of MMO’s.

The combat system was displayed in a tussle between a monstrous dinosaur and a massive, flame-wreathed gorilla in one of Champions Online‘s areas, Monster Island — a sort-of holding pen for giant monsters. Let me repeat that, a massive gorilla on fire, lots of them, on an island! It’s entirely possible I was simply enraptured by the immense flaming ape, but the combat flowed nicely. No waiting for powers to reload (the equivalent of twiddling your thumbs in the middle of storming Normandy), just good, old-fashioned firey-monkey ass-kicking. Oh, and the dinosaur too. 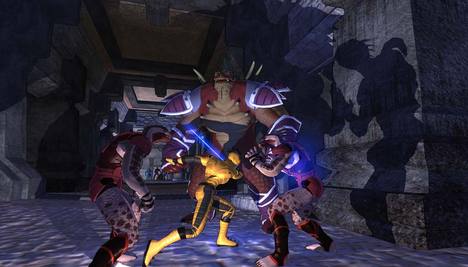 Of course it’s not all apes from Hell and jungle islands in Champions Online. The areas vary widely, ranging from the austere Millenium City (built on the ruins of Detroit, destroyed by the villainous Dr. Destroyer), to outer space, to underground lairs. Each area features instanced dungeons, some of which are playable only as a group and some of which are strictly solo. The soloing aspect has definitely been beefed up from run-of-the-mill MMO’s, providing just as much fun for the hilariously oxymoronic antisocial MMO player.

The art style is also a welcome improvement, featuring cel-shaded graphics as opposed to hyper-realism, resulting in a more comic-like feel to the experience. If I hadn’t already been sold, this right here would’ve done it. As a long time fan of comics, this is what I’ve been waiting for; a superhero game done in a style that’s actually reminiscent of what got us all into this genre in the first place. 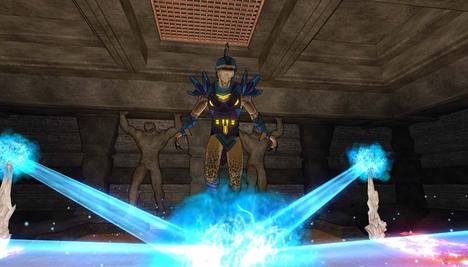 The effort going into making this game stand out from the rest of the MMO crowd is immediately obvious. With so many new features and aspirations of unprecedented interconnectivity, Champions Online is shaping up to be one fantastic game, not just a good MMO. If nothing else, it should have an interesting effect on the development of massive multiplayer games to come.