One of the chief concerns I’ve heard from people regarding Cryptic Studios’ upcoming MMO for PC and Xbox 360, Champions Online, is the lack of the beloved WASD — at least for the Xbox 360 version of the game. It’s a common point of contention considering a console controller simply isn’t capable of the hot-key infused feats of a keyboard or the tunable accuracy of a mouse. Part and parcel of the laundry list of arcane key combinations is a myriad of feedback HUDs that can take up a fair chunk of screen real estate.Even so, by and large the reaction to the idea of playing Champions Online on the Xbox 360 from MMO gamers has been half-hearted enthusiasm followed by a hesitant “Maybe” and the silent assertion that only the PC version of Champions Online will cross their threshold. But that’s not an unwarranted reaction given the bond forged by years of basking in the cool glow of a monitor, tapping out spells, swordplay, and space-battle with a group of similarly enraptured inter-nautical crusaders.

Firsts hands-on impressions after the jump. 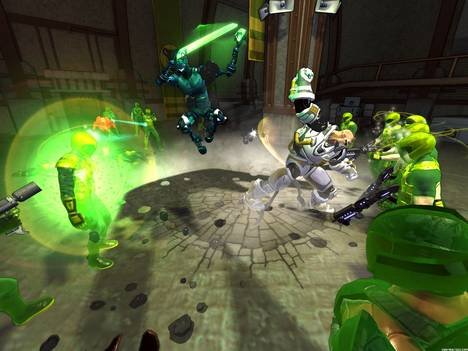 What Champions Online seemingly attempts is to show is that moving an MMO off the desktop doesn’t mean it will end up a crippled mess. Already that’s a tall order, but add-in the action based gameplay that a large section of console gamers demand and that same half-hearted enthusiasm and hesitancy rears its ugly head once again. Admittedly I was optimistic about Champions Online sight-unseen. The news out of Cryptic regarding action oriented gameplay in an MMO that would play as well on the Xbox 360 as it would on the PC had me excited. But having played City of Heroes I was puzzled as to how they’d manage to circumvent the seemingly necessary keyboard and mouse combo. If I hadn’t had the nearly HUDless interface and control schemes pointed out to me prior to the demo, I’m not sure I’d even have noticed that there was something different about my super-heroic MMOing. The whole thing simply seemed like an action game, but with the key difference of having a group of people going through the mission with me — and the potential for many, many more.. The closest I’ve come to the same kind of experience is playing co-op on Crackdown; except instead of two inhuman behemoths traversing a city, you’ve got hundreds of them and now they’ve been given the option to shoot lasers from their eyes. I think I speak for all of us when I say Crackdown might have been a little more fun with eye-lasers. 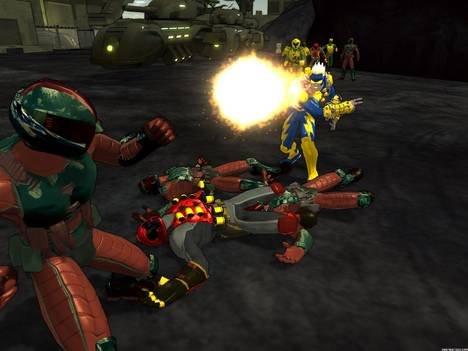 The controls themselves were incredibly natural; playing more like, again, an action game than whatever bash-to-fit, Frankenstein-ian creation PC gamers envision when you say the words “console” and “MMO” too close together. Left thumb-stick to move, right thumb-stick to look around, and attacks, aiming, and blocks spread out among the mere eight triggers remaining. Meaning if you’ve ever taken the bold journey from desk chair to couch, you should have no problem maneuvering with an ease similar to your lumbar-supported desktop sessions. Granted, my session with the game was a bit more limited than I’d have liked. So there wasn’t as much time to explore the actual group dynamic involved in a long mission, but it’s not a stretch to assume it won’t be that different from using Vent or Teamspeak — you’re just using a different headset. While their is a tendency amongst gamers to become over-optimistic about projects for which they’re enthusiastic — and being a dyed in the wool comic-book nerd I’m definitely enthusiastic — Champions Online seems set to make some interesting changes to the way MMOs are played. Turning what’s seen by many as a lifestyle back into a fun game.