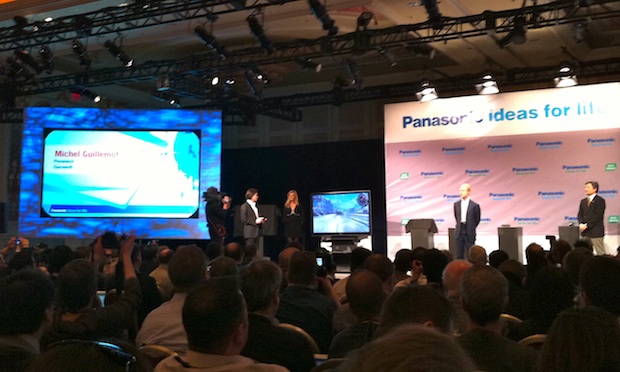 As I watched on at Panasonic’s press conference today in Las Vegas, I saw an app icon on one of the images of a new television that had me scratching my head. Alongside Hulu Plus, Netflix and others was one that read Asphalt 5, and had a picture of a car on it. That’s not an app; it’s a racing game!

Actually, as of today, it’s both. Gameloft boss Michel Guillemot took the stage to announce a partnership with Panasonic to make games for the Viera line of television sets. No, really! These games will come by way of Panasonic’s Viera Connect application system, which is an Android-based system that will let developers deliver apps to their TVs

We saw Asphalt 5 running live on stage, in full, respectable 3D. Gameloft says that these games are fully optimized for the 2011 Viera models. This game will be available at the kickoff of the Viera Connect Market, which will open some time in early 2011. It will feature 28 cars, more than a dozen locations and even some motorcycle action. What’s crazy is that there is even worldwide online multiplayer, with four-player race support.

Other simpler games, like Chess, Black Jack, basketball game Free Throw and others will also hit Viera Connect soon. There’s no word on what else Gameloft has lined up for Panasonic sets.

How will you play these games? Apparently the Viera remote control will work as a gamepad. A game controller will also be available early this year. Gameloft says that any USB gamepad will work, though.