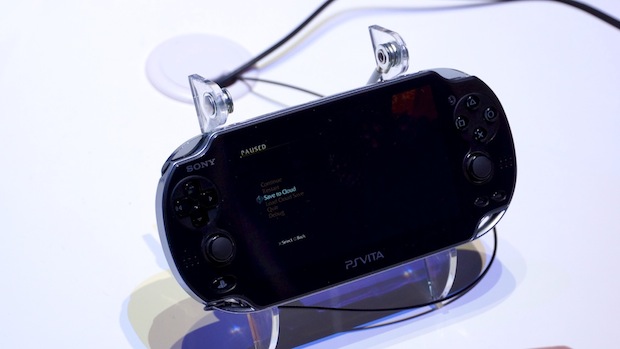 At CES 2012 we got our first taste of some of the cloud and in-game 3G functionality for the PlayStation Vita, set to launch late next month in the US.

With Warrior’s Lair, a third-person action RPG due out in late 2012, cross platform play with the PS3 is available, and continuing your play from one system to another is easy with cloud save support. I first started playing the game on a Vita, and was able to pause, select a cloud save option, and after save confirmation, was able to pick up a PS3 controller and continue exactly where I left off. Of course, the same functionality is available on the PS3 to continue play on the Vita, and same device saves can also be loaded from the cloud.

The whole cloud saving process was incredibly easy, as saves are automatically sent to the player’s PlayStation Network account, with the latest save overwriting previous ones to keep things current. Load time for the save took about 30 seconds, but we were told that this time could be cut in half by launch.

We also got to see AT&T’s 3G connection working in a demo of Zipper Interactive’s upcoming title Unit 13. While cooperative play requires a WiFi connection, all of the other online functions can use the 3G connection. We saw game messages, leaderboards, rankings, prompts and other information reliably appear in the game, even from the overcrowded CES show floor, where the cell signal is often unreliable. Operation was fast and flawless.