Multiplayer in Tomb Raider? What the hell, right? As strange as it sounds, it was pretty easy to get into here at a preview event during CES 2013. The characters and locales come straight out of Tomb Raider‘s single-player, though it looks like producer Joe Khoury and his team at Eidos Montreal had a bit of fun building a multiplayer game around them. 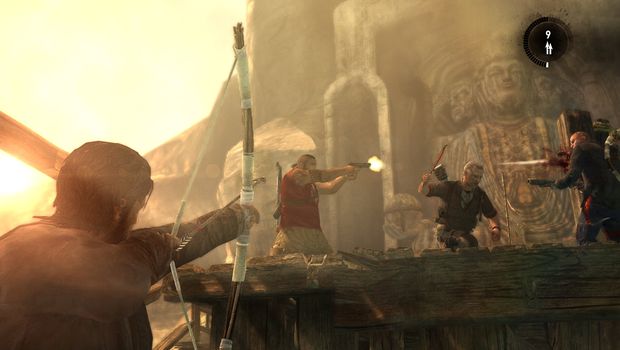 I got a taste of what they’ve been working on in a mode called Rescue. Lara and her friends make up team Survivor [Keep on survivin’!], and it’s their job to run out in the wilds of the island they’re stranded on and find medpacks to bring back to camp. Meanwhile, the Scavengers are there to protect what they have scavenged, and will do anything they need to do so. This mode has the survivors trying to bring back five medpacks while the scavengers are trying to kill 25 survivors — first to meet their respective goal wins the match.

The match balance is interesting as there are completely different elements to each side. For example, the scavengers are… well, scavengers, so they have much more firepower, making survivors easier to take down. Survivors? Not so much in the firepower department. They can down an enemy with weapons, but a close-range melee attack is required for a proper kill. Thankfully smashing in faces with a pickaxe is fun. On the other hand, survivors can equip a bow, and in the right hands, it can be quite scary with its power to kill cleanly and quietly.

The level we played in, called Chasm, has plenty of interesting obstacles to keep this Rescue mode lively. Zip lines are everywhere, letting players quickly slide between levels to try to avoid enemy fire. One group has a device that actually lets them ascend zip lines! There are also many traps to set for the enemy (or yourself, accidentally), including snares that will have you hanging upside down with a misstep. The spike trap is absolutely brutal — walk through a rope and two sides of wooden, sharpened spikes come together to crush you into a bloody mess.

The most interesting feature of the Chasm map is a sandstorm that infrequently blows through it. Being on the right side gives you an unfair advantage, letting you see your teammates and enemies clearly, while the other side sees nothing but sand, leaving them shooting blind or running for cover. These storms almost always turned the tide in the several matches I played. In fact, many of the matches were very tight, which says a lot about the balance that Eidos Montreal was able to achieve. 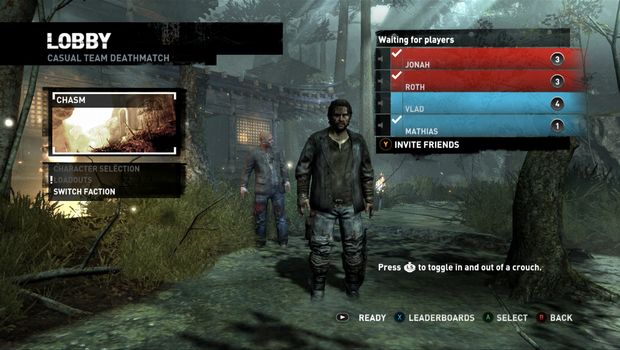 While I wasn’t performing at the top of my game, I found Tomb Raider‘s multiplayer to be enjoyable. I joked that I was “flying and dying” — meaning that I’d take a zip line right into danger. On the ground, it felt like what you’d expect from a third-person action game’s multiplayer. But in the air, whether it be from jumping from heights, or coming down zip lines, it felt unique. There are a lot of opportunities for jumping, grabbing, hanging, and climbing, which gave these matches a very Tomb Raider feel. If that was the goal, well done.

We’d have to play more Tomb Raider multiplayer to make a call, but from this first session, in this one map, I’d say that they’re doing good things. We know there will be the standard Team Deathmatch (from experience — it’s fine, but not as fun as Rescue), but I’m looking forward to some of the more creative stuff that I know Eidos Montreal can come up with.

Tomb Raider comes zipping down the line — multiplayer and all — on March 5, 2013.