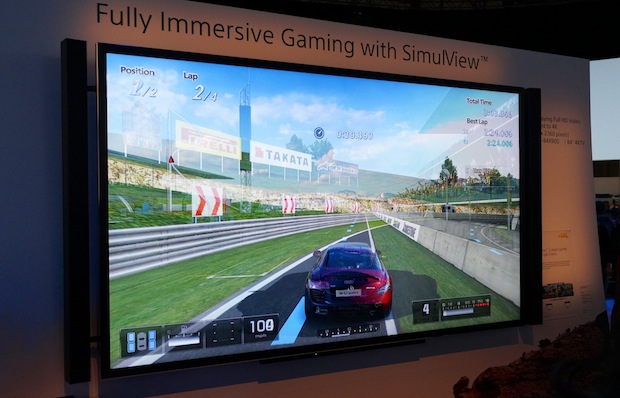 What’s the point of having a 84″ 4K Ultra HD television if you’re just going to split the screen up for two-player play? Sony was probably thinking the same thing when they rigged up this demonstration at CES that uses their SimulView technology to have two players looking at one screen to see two different views.

We’ve seen this technology before on Sony’s PlayStation 3D display, but this is much more impressive as it’s on… well, an 84″ Ultra HD screen. They’ve also scaled up Gran Turismo 5 for 4K resolution for this demonstration, meaning it’s running at 3,840 x 2,160. You won’t be able to appreciate this from our snapshot, so you’ll just have to take my word that it was really impressive.

If you like the idea of having the ability to have two players looking at one screen for different gameplay views through passive glasses, and 24″ wasn’t enough for you, you can pick up this 84″ 4K set for only $24,999 later this year.