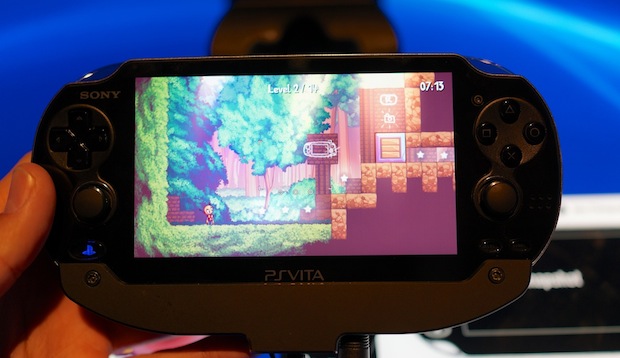 Sony showed off Retro Affect’s upcoming Vita/PS3 title Snapshot at CES this week. This nice-looking PC port uses photography as a puzzle element. A robot named Pic has a camera that he can use to snap pictures of objects in the game’s 2D side-scrolling stages. These images can then be pasted elsewhere in the level to do things like reach new areas or solve puzzles.

Like in any platformer, the left stick moves your character, and the X button jumps. In Snapshot, the right stick controls a frame that can be freely positioned anywhere to snap a shot. The R button captures the picture and the L button places a copy of it wherever you’d like. In early puzzles you’ll snap a picture of a crate and then drop it back into the world when needed to reach high platforms. Sony says that puzzles become more complex, even working object momentum into the mix.

As of now there’s no set release date, but Sony says to expect it on PSN soon.