Remember Razer’s Project Fiona from last year’s CES? That’s now an official product called Razer Edge, which is a tablet, PC, and console all wrapped up into one. Last year it was a Windows 7 screen with console-like controls on either side, but now it’s a Windows 8 tablet PC with several control and docking options.

It looks like a mere tablet, but it’s really a respectable PC (Intel Core i5, Nvidia GT640M LE GPU, 4GB of DDR3 RAM, and a 64GB SSD as a base model) packed into a slightly thicker than normal tablet form factor, faced with a nice 10.1″ display.

Last year, I said that while I couldn’t put my finger on exactly what it was supposed to be, I wanted one anyway. That hasn’t changed, though we now have a clearer picture of what Edge can do for gamers.

The Edge can be used alone, just like you would with any Windows 8 tablet, with touchscreen controls only. Or you can push it into a gamepad controller dock and have something a lot like what we saw when the device was still Project Fiona, with console style controls on either side of the pad. Dock the Edge into a TV dock and have something like a console for your TV. Or pop it into a keyboard dock and make it work like a laptop. All of these configurations make the Edge so much more than just a tablet.

The Edge itself looks hefty in pictures with a thickness far greater than an iPad, but it’s really pretty light (2 lbs), and it’s easy on the hands. It manages to be sturdy and well balanced, but still somehow sleek and appealing. For gaming purposes, you’ll only get so far with the touchscreen, though. 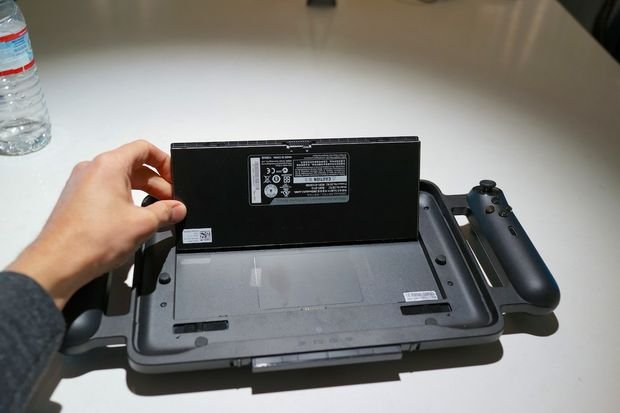 You’ll forget how light the Edge is when you dock it into the controller attachment. The plastic body and its sticks, triggers, force feedback motors, and buttons can’t weigh much separately, but when you combine these and the required battery for this attachment, the weight is noticeable. Drop in the Edge and you’ve got something that will inevitably end up propped up by a knee, or resting against something else. The controls are fantastic, but your muscles will also have to be pretty great to keep this thing held up. 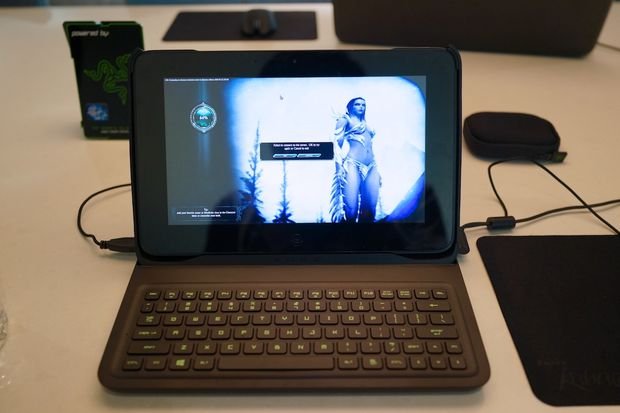 The prototype keyboard dock Razer showed off speaks to me much more as a PC gamer. This unit is almost exactly the same size as the Edge itself, and features a chicklet style and a slot to prop the tablet up in. This gives you what is essentially a really compact gaming PC. Simply throw this combo and a nice mouse into a small messenger bag and you have a super compact gaming rig. It all folds up so nicely that I can’t stop thinking about how great it would be to carry it around as an on-the-go PC gaming solution. 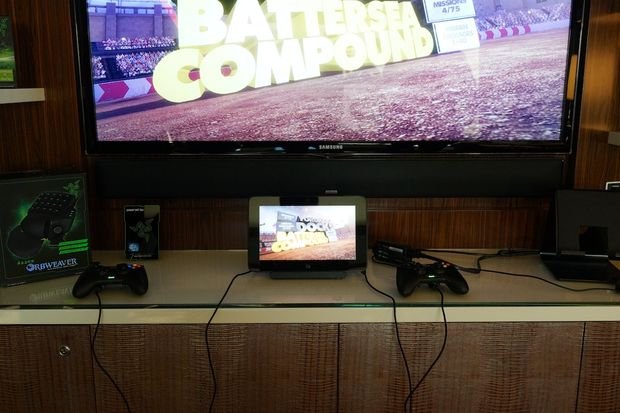 Finally, a television dock has the Edge functioning like a home console. Four USB inputs can be used for controllers, and a HDMI output carries video and audio directly to a television. This gives hassle-free, cordless, instant docking with a full Windows 8 machine. Like Steam’s Big Picture mode? This may be the best way to use it.

Edge performs admirably for gaming. I spent a fair bit of time trying one out with multiple games and came away impressed. While most Windows 8 tablets are built for basic computing, the Edge is spec’d for gaming first, which means that you’ll be able to boot up just about anything on Steam and get going at at least default settings, with all the sparkly stuff turned on. Playing Dishonored at default settings looked great, with framerates coming in at 59 fps. Dirt 3 looked equally nice. The cooling fan did get moving after a bit of play, but this tells me that its 640M was really working.

I don’t think your standard Windows 8 tablet will be pulling off the quality Edge does. Again, the innards would make for a decent gaming PC, which is why this tablet-like device comes in at a PC price. Those saying that an off-the-shelf Windows 8 tablet with a gamepad and keyboard would be a better and cheaper solution aren’t giving Edge its due. 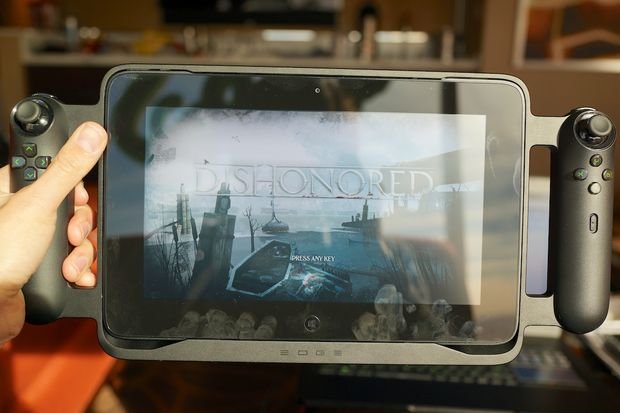 Gamers that desire flexibility and portability should check out what Razer’s doing here. While I’m not completely sold on the $249 controller accessory (a stand and a gamepad would do me just fine), I love that this little 10-inch, 2 lb tablet-sized PC can run whatever you can throw at in both touchscreen and mouse/keyboard modes. And with the $99 TV dock, the Edge could double as a really sleek ‘Steam Box’ for Big Picture play.

We’d have to spend more time with Razer’s Edge to make a full call on things like long-term comfort or battery life, but from the hour or so of time I spent today with it, I can definitely see the appeal. It’s not going to blow away your dedicated desktop or gaming notebook in terms of power, but it will hold its own admirably.

The main takeaway here should be that Edge packs a lot of power in a little package. And that I want one.