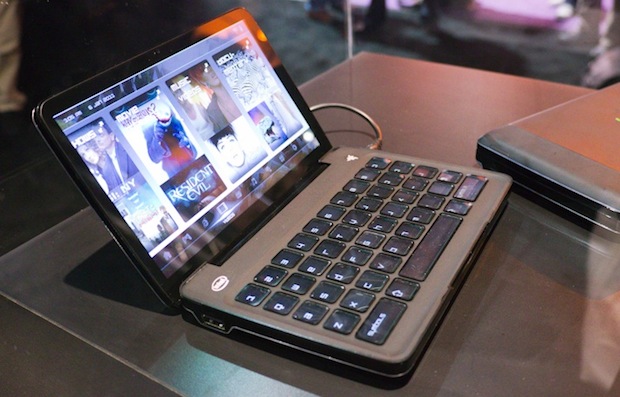 PC gaming isn’t really fully portable yet. Yes, you could lug around a gaming laptop, but even the smallest one out there is something that seems huge next to the portable gaming systems like the PSP and DS. You’ve still got a bag and a power pack and whatnot. PC makers have been trying to make PC gaming portable for a long time, but it looks like a gaming peripherals company has the best idea yet.

Today at CES I got to see the mini PC gaming system Razer is calling the Switchblade. This is a brave new outing for a company that has only made gaming accessories until now. The Switchblade is a tiny little system with a high resolution 7″ touchscreen and keys that can change from game to game. Razer told us that there’s a screen under the transparent keys of the Switchblade, and that they can be customized for each and every game. I saw League of Legends running on the system, and the keys were set to correspond to the game’s commands. A World of Warcraft setting was also discussed. Of course, there’s going to be a standard QWERTY setting for when you want to get your word processing on.

We wanted to talk specs and pricing, but Razer says that it’s still too early. In fact, they say that the system won’t necessarily look like this. The unit you see in these images is only a concept system, and they’re still working to finalize it. We do know that it will run on an Intel Atom processor, and that it will support 3G and Wifi connections. The concept unit had two USB ports, and Razer says that this will likely carry onto the final unit.

If the final unit is anywhere near as portable and attractive, I think a lot of gamers will be interested.