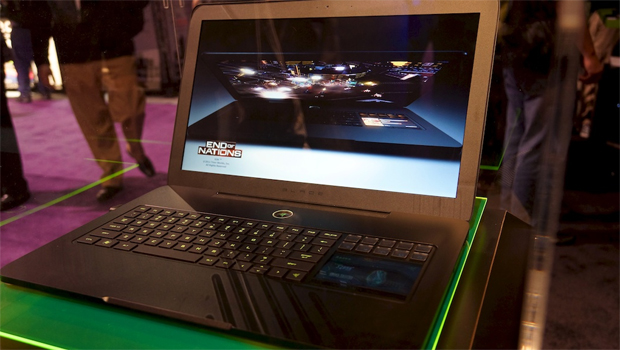 You’ve already heard Dale talk about how Razer’s Project Fiona tablet PC shocked the hell out of us at the show this week, but that’s not the only trick up the manufacturer’s sleeve. We also had a chance to poke around a bit with the Razer Blade, their powerful new system which challenges the idea that gaming laptops have to be clunky, heavy beasts.

Weighing in at only 7lbs and less than an inch thick, the Blade manages to pack in a ton of punch with an Intel Core i7 processor, an NVIDIA GT655M, 8 gigs of RAM and a 256GB SSD. The sleek, aluminum body is really beautiful to behold, as is the 17″ LED display which pops in contrast to the matte finished casing.

The Razer Blade also features Razer’s Switchblade user interface system. In place of a standard trackpad, we have a full-fledged touchscreen with 10 dynamic buttons. These buttons can be easily configured for use in games or other applications, as well as offering some interesting options. Stuck in a game? Use the touchscreen to find a walkthrough video on YouTube. Doing some hardcore accounting work? It can be used as a numeric keypad. The possibilities seem limitless.

It’s a damn cool machine, to say the least. Retailing at $2,799, you’re getting a hell of a lot of bang for a not inconsiderable amount of bucks. But if you want a truly portable gaming laptop without sacrificing power, the Razer Blade should absolutely be a consideration.