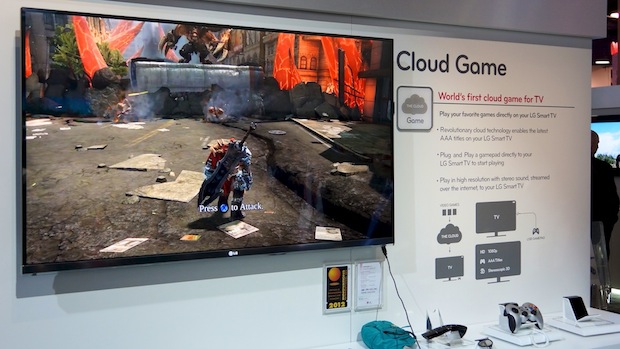 At CES 2012 television maker LG showed a prototype set that is capable of playing games from the cloud, with no other hardware required. Simply plug in a controller to your TV and play games in HD. The future is now. Almost.

We spoke with a representative from Gaikai, LG’s partner for this launch. She told us that the work is still at the pre-alpha stage, but the play on a 55″ LG Smart TV already looked great. 1080p HD gaming came across beautifully, with no sign of lag and very little in the way of signal degradation. Games like Street Fighter IV and Darksiders came down from the cloud to the CES show floor with no issues. An off-the-shelf Logitech USB PC controller was being used to play games from Gaikai’s library, but we were told that the Xbox 360 controller and even other wireless solutions work just as well.

Gakai’s rep says that this demo is so early that they do not have details on which sets will feature cloud gaming yet. There’s also nothing in the way of pricing. We were told to expect an experience with even higher quality visuals and more responsiveness when the program finally launches.

Do you see a future for yourself where you would just need your TV to play games? No discs, installing or patching?