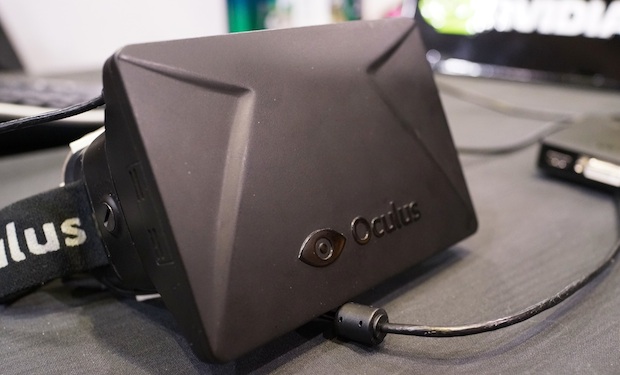 At CES, Oculus is showing off the latest Rift prototype from the factory of the Kickstarter developer kit that is expected to ship soon. While the latest version of the handmade prototype is being demoed off here, the fancy looking dev kit shown above is for looks only. Notice that it has a bigger 7″ screen, up from the 5.6″ we saw at Quakecon last summer. Looks nice, doesn’t it?

As for what’s being shown off in a new demo, changes from Quakecon include a new sensor, which takes things up from a 250 Hz with a standard part to a new, internally developed sensor that runs at a rate of up to 1,000 Hz. Oculus’ VP of Product, Nate Mitchell, tells us that this cuts out about 8 milliseconds of latency, which is a huge improvement.

Finally, new demos use predictive head tracking, which guesses which way your head might turn to get the jump on the view to be rendered. Mitchell says that by rendering where the software might think you’ll be, the perceived latency can be lowered even farther. Software magic, folks.

Partner previews of the SDK are already out to select developers. They expect that people will get full developer kits in early March.