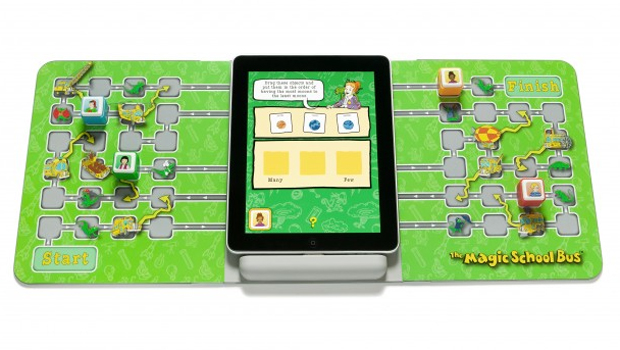 As many of you are aware, my passion for games extends far beyond the computerized entertainment we all hold so dear. I was raised as much on board games as I was on videogames and I usually love it when those two worlds intersect. At CES this week, I saw another example of this convergence in the Game Changer from Identity Games, a dynamic board game system for the iPad.

The Game Changer is a tri-fold board with a docking port for the iPad in the center and flat button pads arranged in a grid on the surrounding panels. Each game for the system comes with a pair of overlays for these side panels which then represent a physical board on which real pieces are moved about. The iPad then manages game tasks and instructs players, receiving information when pieces are moved and pressed down on their new spaces.

Now, remember back there when I said I “usually” love these kinds of convergences? The Game Changer is the exception that proves the rule. It reminds me of the Leapfrog Leapster, an edutainment device designed like a handheld gaming console. Except the Game Changer is worse because instead of having a device limited to dull, simple games, you’re basically turning your versatile and powerful iPad into a children’s toy for $80.

Now, I’ll grant you that kids will probably gain more satisfaction out of moving a physical piece around a board than dragging a virtual piece around a virtual board on a tablet. I can dig that. And the advantage of being able to have multiple games on hand easily without a ton of pieces to keep track of is a very real one.

Right now, though, the games don’t seem like they’ll be interesting to anyone over the age of ten and I know I wouldn’t let a nine year-old anywhere near my tablet. Identity Games promises that more games will be coming, with six games currently available and another four expected by the time the Game Changer has its European launch this August, so the situation may improve but I can’t say I’m compelled by this in any way right now.