At least not yet

Yes, Valve is in cahoots with Xi3 Corporation, and there’s something neat on the horizon, just as we heard earlier today. But the new tiny box form factor computers debuted at CES this week are not necessarily the long-rumored Steam Box. That’s something that’s just a bit farther down the road, unfortunately.

But we can use what is being shown off at CES as a sort of rough preview of the upcoming Xi3 and Valve collaboration. The development platform is codenamed Piston. (Get it?)

Xi3 confirmed that they are working with Valve on developing a platform that will be based their 7 Series modular computers. These look a lot like a machine we saw last year at CES, though the innards are more powerful. The top configurations feature quad-core processors and high-end ATi graphics. The 7A in its top configuration sports a 3.2 GHz quad-core processor and HD 7660G ATi GPU. Memory of this computer is spec’d at 8GB DDR3, and SSD storage is rated at 12 Gb/sec.

Will PC gamers be happy with the horsepower of whatever comes out of project Piston? It’s hard to say, and Xi3 isn’t confirming any kind of specifications yet. We were told that the 7 Series would readily serve as an engineering workstation. If that’s really the case, then the 7A alone would surely be up to snuff as a gaming box, wouldn’t it? The Piston, which is based on the 7 series, could be even better.

One Xi3 rep seemed to be telling us as best as he could that there should be no concerns as far as gaming power goes: “Because Valve has invested in us, they now have a vested interest in making sure this would be a good product for gaming.” 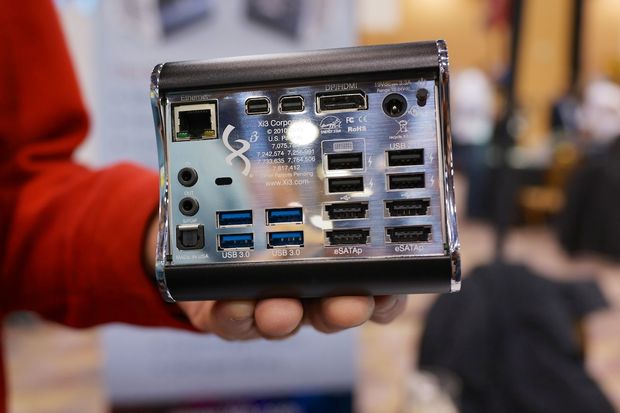 He continued, “And we have no intention of producing something that wouldn’t be up to snuff.”

If you want even more of a hint of what to expect from Piston, know that that the 7A consumes 40 Watts. The smallest of Xi3’s line is called the Zero, and at 15 Watts it can drive 2 HD monitors, can can go up to 2500 x 1600 resolution. Draw from that what you will.

Price? Again, nothing in the way of confirmation, but that Zero mentioned above will be announced at $399 this week.  The 7A will top out at $999 in its top configuration.

Finally, Xi3 is not using the name ‘Steam Box’ while discussing this project. They don’t mind throwing around “Piston” at all, though. When I called their upcoming device a ‘Steam Box’ during our chat, one Xi3 rep said, “You called it that. Not me.”