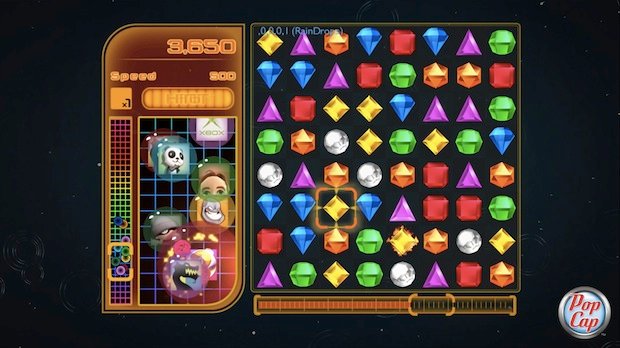 Bejeweled is always fun, but it’s a different kind of fun when you’re playing it as fast as you can up against 15 other players in 1 minute matches.

I…I didn’t know. I just saw some Bejeweled action from across the room and walked up to it. I picked up a controller and started playing. The countdown timer started at the bottom. Bubbles with heads in them were blowing up on the left. People were laughing. At me, maybe. All of the sudden, PopCap senior Producer Kirk Scott was watching over my shoulder. I panicked. I moved the cursor around aimlessly and made some unmatched moves. I couldn’t find any moves! I lost.

That was my first run of Bejewled Blitz Live‘s Party Live mode. A party has 16 players going at it at the same time, working to make matches on a board as fast as they can in 1 minute rounds. Their score is tracked in a graph that uses bubbles with avatar heads in them to track progress. Those doing well will float to the top of the graph. Those like me will drift toward the bottom. In these parties you can pop in and out at any time, but you’ll want to hurry back from that paused pee break, as after three minutes your “balloon” will start to slowly drop. You want to be the life of the party, right?

Bejeweled Blitz Live has this Party Live mode, online and local battle modes (splitscreen), and a single player mode in both classic Bejeweled and Bejewled Twist versions. Both modes have 50 levels, and both support leaderboards online. I watched Scott go at it against others at the event in Twist in Party Live. Unlike the original PC version, you can twist a cluster of four gems both right and left to match three in a row. Between this and using the bumper to get hints for the next move, Scott was firing off matches like a madman. I absolutely could not roll with the speed he was keeping at Twist. Intimidating? Let’s just say that I’ll have to practice a bit. I was still a bit nervous from that first round.

Back in classic mode, I felt more at home and was more mindful of how the focus of the game changed for competitive play. I was doing better. In this format, working to set up multipliers is key. It’s just hard to do that when you’re up against people and a clock. When you do cause explosions on your board, the head bubbles on the leaderboard graph will also display a corresponding graphic, like a small fire around your bubble. Between these visual and other sound cues, you feel like the pressure is being put on you to keep going. Faster! More matches!

This is puzzle gaming at its most competitive. Scott called this PopCap’s Call of Duty. I could see that. It was already easy to see that getting a group of friends in on this is going to be a blast. The game even has a combined Friendscore, which totals your score with everyone on your list. This scoring combined with the realtime leaderboards and achievements for top rankings is going to make this a huge game for competitive gamers on Xbox Live. I’m going to practice. See you at the top.

Bejeweled Blitz Live will be released soon as part of the Xbox House Party series.