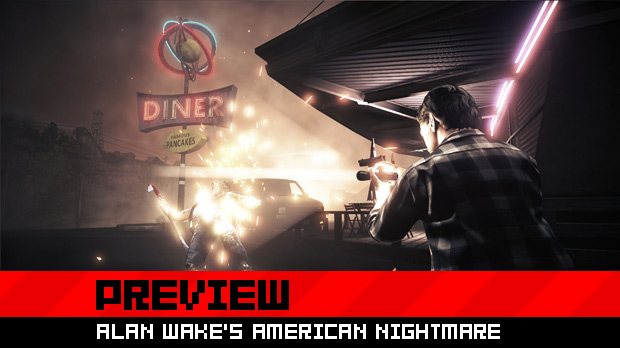 I was a big fan of Remedy’s Alan Wake. But one of the less thrilling aspects was the combat, which never really evolves much throughout the game and begins to feel a little like a chore the longer you go. My solution to this was to simply play on nightmare difficulty, where you spend far more time fleeing from enemies than actively trying to stop them and that kept the excitement level up.

With Alan Wake’s American Nightmare, coming soon to Xbox Live Arcade as part of Microsoft’s House Party promotion, this should not be a problem. Remedy has taken the criticism leveled at the original game’s combat and made that a priority, bringing new enemies, new weapons and a whole lot more challenge with it.

Today at CES, I had the chance to check out the game’s arcade mode which pits Alan against waves of increasingly dangerous enemies which he must stave off until dawn. The stage I played was set in a graveyard and a pretty large one at that. Weapons are scattered around the environment along with the occasional safe haven, lit areas underneath lamps which will provide temporary respite and refill Alan’s health before flickering out.

The combat system follows the same pattern as before. Enemies are protected by darkness which must be burned off using a flashlight before they are rendered vulnerable to attack. Gamers already familiar with Alan Wake are in for a surprise or two, though, as new enemy types will require you to switch up tactics. The grenadier, for example, keeps his distance and uses explosives to ruin Alan’s day.

Even more insidious are the Splitters. These enemies aren’t coated in darkness at all and can be immediately killed. But if you focus your flashlight on them, they’ll multiply and become even more of a pain in the ass. Toss one or two of those into a group of regular enemies and it’s very easy to wind up with an uncontrollable mob on your hands.

The combat is also more frantic than ever. Enemies are much more aggressive and the pace of the game is very quick. Even as an experienced player, American Nightmare ripped me a new one and neither of my two attempts to survive the ten minute round met with success.

That’s a good thing and I expect that the end result is going to be one hell of a good time to play. Remedy couldn’t give us a firm date on when we’ll get to play the game in its full glory, as Microsoft has yet to reveal the order in which the House Party titles will hit XBLA (natch). All I can do is expect to be shining a light in the darkness sometime in late February or early March.