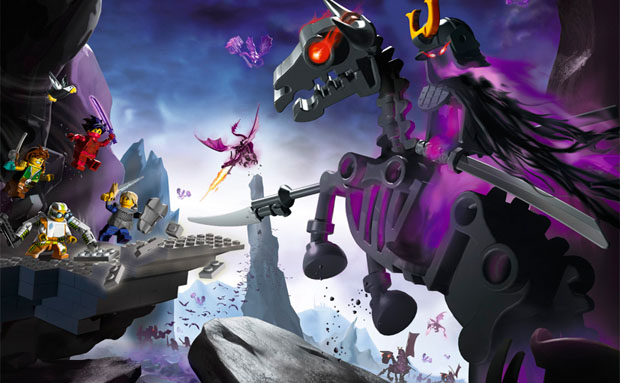 Look, I’m not trying to sell you on a PC MMO that is targeted at younger boys. I’m just saying that there’s content in this game that is cool enough that I’m sure you’ll want to give at least parts of it a spin. I went into a meeting expecting to see a kids game, but I came out wanting my own copy.

Lego Universe is a MMO for Lego fans. It’s in alpha now, and will be released on PC in mid 2010. It puts players in a world where they will create their own Lego avatar to set out and explore a world where they’ll have to use creativity to solve puzzles and play with others. Of course, all of this revolves around building things with Legos. At its core this is an action/platformer MMO that has a bit of a console feel, which means that just about anyone can pick it up and play. Players will use Lego weapons to take on Lego baddies that inhabit what would normally be peaceful Lego worlds. Top-notch graphics, involving game play, smart protective features and a real focus on ease of use are going to make this a hit.  Simply put, this game will let people play with their Legos with friends all over the world. This will be big. But why am I so into a game that is going to be marketed for 12-year-old boys? It’s all about the creative aspect.

Playing through the standard mode earns you blocks that you’ll be able to use later in your own world to build whatever you wish and share with everyone. Imagine an island where you’ll have full control to build anything you can imagine in a 3D space, brick by brick. With enough blocks, you can create a fantasy resort for people to visit. You can try staging a scene from your favorite movie. The sky is the limit, and with the really slick building tools, it all looks totally possible.

The possibilities from this alone was enough to get me excited, but then they showed me the programming language. Wow. With some very smart and focused basic programming tools, you’ll be able to take your creations and make them interactive. Say you had a castle with a door and you wanted it to open on approach. You could use a visual editing mode that features pre-programmed behavior blocks to do this. Or anything else. I saw examples complex enough to have one action send a trigger to another function. The possibilities seem endless. If you were the creative kid growing up, you’ll definitely want to give this feature a spin.