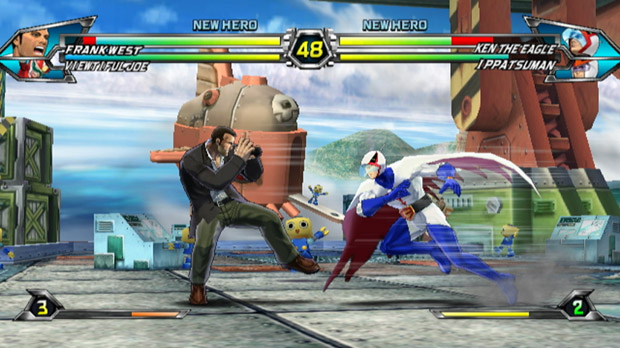 You guys already know that Dead Rising‘s Frank West in Capcom’s upcoming Wii brawler, Tatsunoko vs. Capcom: Ultimate All-Stars. No news on that. I just wanted to let you know that I gave him a spin, and he’s great fun to play.

Frank spent all that time and hard work getting out of the mall, but now he’s back in. I got to check out the Williamette Mall stage so that Frank might feel right at home. In the background, hundreds of zombies watch from behind barriers and from the second floor of the mall. Watch for awhile in the background and you’ll see some strange zombie behavior. They’re normally just spectators, but some shopper zombies occasionally pass by. There’s even a Servbot-headed zombie in the mix.

Frank himself is a fine fighter. I mean, he’s covered wars, you know. Just like my beloved Jill Valentine in Marvel vs. Capcom 2, Frank can call forth a zombie to get into the mix. These lumbering losers are best used to get some extra hits in the action. Following up with a combo after the zombie hits your opponent is cool. Just keep in mind that zombies can hurt Frank too.  He has brought along some of his favorite weapons to fight with. You can still hit your enemies with golf clubs, but he left the orange juice jugs out of it this time. All of this pales in comparison to his projectile: speeding zombie shopping carts. The fastest one never failed to make me laugh. Your opponent won’t, though.

My favorite move? One super has to be spaced correctly, but when done right, Frank caps the head of his opponent with a Servbot helmet. Then he beats the sh*t out of him/her. Frank is a blast to play.

It should be noted that I played Frank with the upcoming MadCatz Tatsunoko vs. Capcom FightStick, which worked beautifully. Many zombies were sent forth with the greatest of ease.